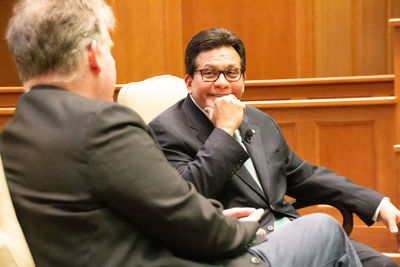 "I encourage all of you to pursue public service, but go into it with your eyes open and your armor on," Gonzales told law students in the McCartan Courtroom. "The higher you go, the more influential or powerful you are perceived to be, the more you are going to be criticized. ... But it's worth it. I wouldn't trade it for a second."

Professor Bill Kelley, who served in the White House as deputy counsel to the president from 2005 to 2007, led the discussion.

Gonzales is now the Dean and Doyle Rogers Distinguished Professor of Law at Belmont University College of Law in Nashville, Tennessee.

The event was sponsored by Notre Dame Law School's Federalist Society and the University of Notre Dame's Constitutional Studies Program.