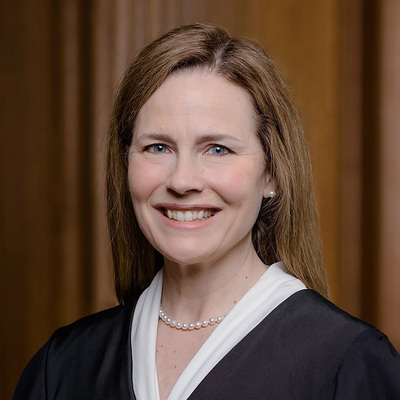 Due to limited seating in the McCartan Courtroom, in-person attendance at Justice Barrett’s speech will be open only to Notre Dame Law School students and faculty, students in Notre Dame’s Constitutional Studies Program, and members of the media.

Justice Barrett graduated from Notre Dame Law School in 1997 and joined the faculty as a professor of law in 2002. She served as executive editor of the Law Review when she was a student and later served as its faculty advisor for many years.

In 2017, she was appointed as a judge on the U.S. Court of Appeals for the Seventh Circuit. She remained a Notre Dame Law School faculty member and continued to teach part time after her judicial appointment. She was confirmed to the U.S. Supreme Court in October 2020.

“For more than two decades, Notre Dame Law School was blessed by Justice Barrett’s brilliant scholarship, devoted teaching, and thoughtful approach to legal questions,” said G. Marcus Cole, the Joseph A. Matson Dean and Professor of Law at Notre Dame Law School. “We look forward to welcoming her back to the Law School for this year’s Federal Courts Symposium.”

The 2022 Federal Courts Symposium, titled “The Nature of the Federal Equity Power,” will focus on that which remains unsettled about the qualitative nature of the federal equity power, its relationship vis-à-vis law, and its proper scope within the broader constitutional system of law. The symposium will feature several panels of prominent legal scholars who will address these complex questions from historical, judicial, and academic perspectives.

The papers from the symposium will be published in the Federal Courts issue, one of Law Review’s five annual issues and dedicated specifically to topics in the area of federal courts, practice, and procedure.

“We are honored that Justice Barrett will participate in the symposium. Not only did she play an important role in establishing the federal courts symposium, but she served for many years as advisor to the Law Review. We are delighted to welcome her home,” Garnett said.

The symposium will be Justice Barrett’s second visit to Notre Dame Law School during the 2021-2022 academic year. She returned to campus at the beginning of the fall semester to teach an intensive, one-week course on statutory interpretation to third-year law students.

Click here to see the full schedule for the symposium.