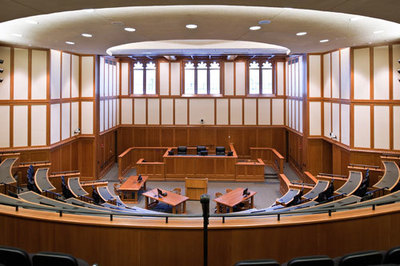 For the third time in a year, the U.S. Court of Appeals for the Seventh Circuit has ruled in favor of an appeal argued by Notre Dame Law students participating in the Law School’s Seventh Circuit Practice Externship.

Hanna Torline ’20 J.D. and Yara Rashad ’20 J.D. jointly won a direct appeal of a criminal conviction, securing a new trial for their client in United States v Orr. They first-chaired the appeal in the case while they were third-year law students in the externship. They reviewed the record, identified the issues on appeal, wrote the briefs, and conducted the oral argument.

The Seventh Circuit concurred with their argument and vacated a conviction of their client, Earl Orr. The decision was based on conduct of the trial judge that breached the Code of Conduct for U.S. Judges by engaging in improper ex parte communications in other cases with members of the U.S. Attorney’s Office.

Rashad said that participating in the Seventh Circuit Practice Externship was the most rewarding experience she had in law school.

“Working on this case taught me how to utilize vital resources, engage in creative lawyering, and above all — believe in my abilities,” said Rashad. “The difficulty of this case was exacerbated by the Covid-19 pandemic, but it was important for us to continue to advocate for Mr. Orr and, ultimately, secure the relief he wanted and deserved.”

Torline agreed, saying, “Working on Mr. Orr's case was the first time I really saw how my academic experience in law school could make a concrete difference in an individual’s life.”

Austin Ridgeway ’20 J.D. won a habeas corpus appeal earlier this year in a case that involved whether an attorney is constitutionally ineffective by failing to file a notice of appeal requested by his client. After Ridgeway filed his brief, the case was remanded back to the district court to allow for an appeal.

In addition, Alyssa McClure ’19 J.D. won an appeal last fall in a habeas corpus case, challenging an enhanced 15-year mandatory-minimum sentence. Her client, Daniel Portee, was resentenced in January to time served plus one year of supervised release.

Notre Dame Law students argued another case in June that involved a conviction under the Computer Fraud and Abuse Act. That issue was whether IP address information obtained without probable cause, pursuant to the Pen Register Act, should be excluded under the Fourth Amendment and if changing another’s password constituted “damage” under the act. The case is awaiting a decision.

“During the 30 years or so that I’ve been working with Notre Dame Law students in the Seventh Circuit, I’ve been very proud of every student’s dedication and professionalism in representing clients who had nowhere else to turn. Win or lose, our clients always know that the students met the highest standards in their representation. The court and opposing counsel often agree,” said Robert Palmer, adjunct professor of law and partner at May Oberfell Lorber in South Bend. Palmer has supervised Notre Dame Law students in the Seventh Circuit Practice Externship since 1992.