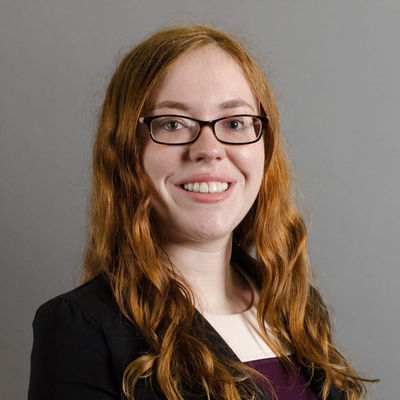 Lenora Popken, a rising 3L, has been selected to receive the Peter A.R. Lardy Scholarship Award for the 2019-20 academic year at Notre Dame Law School.

Like previous Lardy Award recipients, Popken has devoted an extraordinary amount of time and talent to public service.

"The testimonials and recommendations we received in support of Lenora paint a vivid picture of a remarkable woman whose hard work, positive attitude, and commitment to serving others has been uniquely supportive to her fellow students as well as to those outside of the Law School," said Nell Jessup Newton, Joseph A. Matson Dean and Professor of Law of Notre Dame Law School. "She is clearly well deserving of this award."

The Class of 1975 established the scholarship to honor their classmate Peter A.R. Lardy, who died of cancer during his third year of law school. The award, which includes a substantial tuition remission for the recipient’s third year of law school, is dedicated “to those who exemplify his courage, love, and understanding toward his fellow man.” It has been awarded each year since 1976.

Popken said, “I am beyond honored to receive an award dedicated to the memory of such a beloved law student. I cannot put into words how much it means to me that the Notre Dame Law School community took the time to write letters on my behalf. Their support and affection means the world to me. This award takes a massive weight off of my shoulders regarding financing my last year of law school, and I couldn't be more thankful. When I see the list of prior recipients I am both humbled and honored to be included in their incredible ranks.”

Faculty and classmates alike attested to Popken’s selfless dedication to both the Notre Dame Exoneration Project and the Wrongful Conviction Externship, and she drew rave reviews for her work as the assistant coach of the University of Notre Dame Debate Team and her work as a mentor to 1L students as well.

On top of all this, Popken is an exemplary student. A number of students expressed astonishment at how well prepared she was for every class. One wrote, “She improves all of our learning because of this and raises the standard. Her preparation improves all of our learning.” Another observed that “it truly amazes me how Lenora can juggle everything and always positively contribute and facilitate class discussions.” Summing up all of these qualities, one classmate concluded that, “She is one of the reflexively sincere and supportive people that make the Law School a community, and I think those qualities deserve acknowledgment.”

Faculty fully concurred. Professor Jimmy Gurulé first met Popken when she was a student in his first-year Criminal Law course. He subsequently came to know her well when she was also a student in his Death Penalty seminar, in the Wrongful Conviction Externship, which he supervises, and as an active member of the Notre Dame Exoneration Project, for which he is faculty supervisor. Popken, he said, is a special person. “She is a person of high moral character. Furthermore, she wants to use her legal knowledge, training, and skills acquired during law school to help the most needy, disadvantaged members of society. She is an inspiration to me and her law school classmates and is fully deserving of this prestigious award.”

Professor Jennifer Mason McAward, who had Popken as a student in her Civil Rights course, said she also had the “good fortune” to get to know her outside of the classroom context. “In addition to being smart and diligent, Lenora has overcome adversity in order to thrive at Notre Dame Law School. She has done so with an impressive amount of steadfastness and good cheer. She will be a credit to the Lardy Memorial Scholarship.”

Next year, Popken will serve as president of the Notre Dame Exoneration Project and will continue working on a case to which she has been assigned since her first year. She will also serve as the chair of ethics for the Future Prosecuting Attorneys Council and as the head coach for the undergraduate debate team. After graduation she hopes to work in the area of criminal law and justice reform.

“The dream,” she said, “would be to continue my work attempting to free those wrongfully convicted for crimes they did not commit, preferably in a way that would also allow me to work with law students and encourage them to undertake this crucial work.”

Elliot Slosar, a Chicago lawyer at the civil rights firm of Loevy & Loevy who donates his time as a staff attorney with the Exoneration Project, could not be happier with those plans. “Lenora,” he said, “will be a remarkable attorney in the field of public interest law. Put simply, Lenora has regularly displayed a passion to rectify the ultimate injustice — the conviction of an innocent person. Through this drive, I have seen first-hand the effects of Lenora’s courage, love, and understanding towards the most vulnerable human-beings.”

See past recipients of the Lardy Scholarship Award.