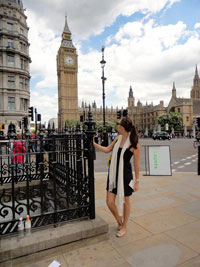 It was “a once in a lifetime experience,” Australian law student Chloe Donjerkovich recounts.

Last summer, Chloe and 33 other law students from around the world embarked upon Notre Dame Law School’s Summer in London Program. Students of the six-week program selected up to six credits of international law courses taught at the Law School’s central London campus.

We recently asked them to share their thoughts on the experience. While their compliments were many – we heard superlatives like “life changing” and “most memorable summer of my life” – two themes were clear. What these students remember most were the opportunities to explore Europe’s history and culture, and to study international law in the most international of settings.

The fully-accredited program is led by recognized leaders in international law, the majority of whom actually practice or teach their area of expertise in Europe.

Megan Olmstead, now a 2L at Notre Dame, says her course on the English Legal System “shed light on our American legal system in ways that classes at home do not have the opportunity to do.” Joshua Saville’s Australian perspective is even keener. “Learning international law from a Canadian professor in London with a bunch of Yanks,” the 2L from Perth recounts with good-natured diplomacy, “makes for great debate.”

Seven courses are offered in 2012 – a generous selection compared to many other programs, says Professor Steven Cribari, co-director of the Summer in London Program. All take full advantage of the London setting. “These are not just American courses transplanted,” explains Professor Cribari. “We go out of our way to overtly integrate the UK-London experience with the course experience.”

That integration means students don’t just learn international law in the classrooms; many see it in action. Students in the Press Freedom in the UK course may visit the BBC, or hear firsthand from UK media lawyers and journalists. “Those of us taking Carriage of Goods by Sea were given the opportunity to go on several excursions,” recounts Joshua. “One of these was to a law firm specialising in shipping law and hearing about the negotiations they had recently undertaken with Somali pirates.”

Live in the heart of the world’s cultural capital 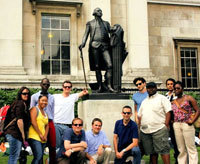 Even New York magazine has knighted London the “capital of the 21st century,” and both of Notre Dame’s wholly-owned teaching and housing facilities are “in the absolute heart of the city,” says Greg Lacey, now a 2L at Cooley Law School. “Only a minute walk after class and you’re in Trafalgar Square, and but a stone’s throw from Westminster.” Ten more minutes may find you at Waterloo Gardens, Downing Street, or on the River Thames.

“It’s not a suburb. It’s not on the edge,” adds Co-Director Geoffrey Bennett. “You’re right in the middle,” which Professor Bennett says is “extraordinary,” compared to other London programs.

Joshua liked that his class schedule ran only four hours per day, four days of the week. “If you did a bit of study after class, there was time to take a long weekend to travel,” he says. His highlights were weekend holidays to Spain, Belgium, and “celebrating the 4th of July in London with my new American friends.” A popular choice for many is a weekend in Paris, “only a 2 hour trip away due to the fantastically convenient Eurostar,” says Chloe. Harriet Hay’s itinerary was even more ambitious – the 2L from Perth, Australia “jetted off to Amsterdam, Ireland and Barcelona.” Greg didn’t even bother destination-dropping. “In the length of the program and shortly thereafter, I went to 11 countries,” he sums.

For others, the London experience is more about new people than new places. “Because our summer program is open to other law schools,” says Megan, “I had the privilege of meeting students not only from schools throughout the U.S., but also law students from programs in other countries. I made life-long friends and now have people to visit in Australia.”

Their summer may be over, but our students say the experience will stay with them forever. “The experience really opened my eyes to many aspects of international law and potential careers that I had not previously considered,” says Michelle Jack, a 2L from Perth. Greg concludes, “let me tell you, this program is world-class.”