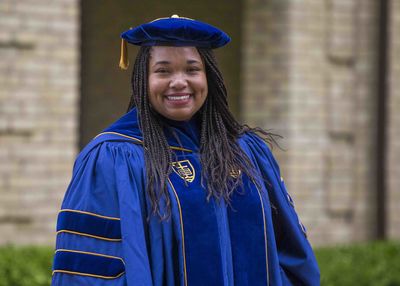 When Ashley Bowman received her J.D. on Saturday from the Law School, she became one of the rare Triple Domers with three Notre Dame degrees. (She earned a bachelor’s degree in business administration in 2014 and an MBA in 2016.)

Before she headed off to study for the bar exam and start her legal career in Atlanta, Bowman reflected on the impact Notre Dame has had on her life and the things she will miss about being on campus.

It’s a long list – from the many traditions Notre Dame celebrates to the friends she made as an undergrad living in Pasquerilla West Hall and singing in the Voices of Faith Gospel Choir.

“The Grotto is a very special place, and I don’t think you realize it until you’ve spent some time away,” she said. “Having chapels in every dorm is something you don’t get anywhere else. It’s easy to make faith a big part of your life here. That’s something you have to fight for later.”

Bowman’s mother is a lieutenant colonel in the Air Force, so she lived all over the United States while she was growing up.

She immediately felt at home here under the Dome.

“I came here for spring visitation for admitted students when I was a senior in high school, and I just fell in love,” she said.

Bowman spent the 2017-2018 academic year in London, participating in the Notre Dame London Law Program. She said coming back to campus last week for commencement was emotional.

“When you turn down Notre Dame Avenue and see the Golden Dome through the trees – that will always be something special,” Bowman said.

“I’m really thankful I got to be here. ‘Thankful’ is the word on my heart right now.”