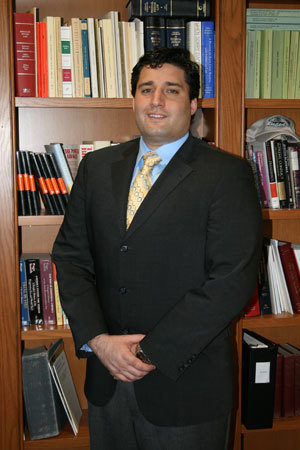 I am pleased to announce that Robert Anthony Sharp will become the 11th Dean of the University of Notre Dame Law School on April 27, 2010 and has agreed to serve in that important and august position until April 28, 2010. During Dean Sharp’s short – but surely memorable – deanship, I will return to the faculty to concentrate on my research.

Dean Sharp was chosen by an incredibly rigorous process – he was the highest bidder at the Fr. Mike Show – and I am confident he will serve the law school community well. Dean Sharp graduated from UC Berkeley in 2007 with a BA in Political Science, with an emphasis on International Relations and Human Rights. (He will thus be the second Golden Bear to hold the Deanship at Notre Dame.) Dean Sharp is currently a 3L at N.D.L.S., who spent his second year on the London campus. After London, Rob spent the summer of his 2L year working at the U.S. Embassy in London for the U.S. Department of Justice. Rob has focused his studies on international law and his interests include international law, politics, and rugby. (In another interesting coincidence, my brother, also named Rob, founded the rugby team at Notre Dame. Rumors that Dean Sharp’s selection was biased in any way by these coincidences are, of course, grossly unfair – he paid for the privilege, fair and square.)

Dean Sharp’s tenure in the Dean’s office will begin Tuesday morning, April 27, at 9:00 AM in the Dean’s. The associate deans and senior administrators will brief Dean Sharp on pressing issues facing the law school. I am counting on him to solve all of these problems during what I expect will be a short, but fulfilling, tenure as dean. He will be assisted throughout the day by Julie Shook, the Dean’s assistant.

Dean Sharp has assured me that he has no plans to make radical changes in the policies or practices of the law school. Finals, for example, will not be cancelled. So don’t get your hopes up!

Dean Sharp’s deanship will be short, but I am sure it will be memorable. After a day on the job, he will have to resign to study for finals.

Please join me in welcoming our new dean!