The U.S. Court of Appeals for the Armed Forces came to Notre Dame Law School on Tuesday afternoon to hear arguments in United States v. Edward Mitchell – a case that considers issues of self-incrimination and the use of information on a smartphone during a criminal investigation.

Three of the Law School’s students had opportunities to participate in the case before the court, which normally holds its proceedings in Washington, D.C. The court exercises worldwide appellate jurisdiction over members of the armed forces on active duty and other people who are subject to the Uniform Code of Military Justice. The court has five judges, one of whom is Notre Dame alumnus Margaret A. Ryan, ’95 J.D.

Sean Flynn, 2L, presented an oral argument in support of the United States, which is the appellant in the case. Flynn and Alyssa Hughes, 3L, submitted an amicus brief under the supervision of Notre Dame Law professors Jimmy Gurulé and Marah McLeod. Gurulé is an expert in international criminal law, and McLeod teaches courses in criminal law and criminal procedure.

Flynn is a graduate of the U.S. Military Academy at West Point and is on active duty while attending Notre Dame Law School through the Army’s Funded Legal Education Program. He plans to enter the Judge Advocate General’s Corps upon graduation.

Hughes has also accepted a commission with the Army JAG Corps.

Barceleau earned his bachelor’s degree at Franciscan University in Steubenville, Ohio, while on an Army Reserve Officers’ Training Corps scholarship. He plans to apply for a position in the JAG Corps next fall.

Flynn and Barceleau both had 10 minutes to present their arguments to the court after attorneys for the United States and Mitchell, respectively, presented their arguments.

Mitchell, a U.S. Army sergeant, was charged before a general court-martial at Fort Hood, Texas, with numerous offenses involving the sexual assault and harassment of his ex-wife. Despite being ordered not to contact his ex-wife, Mitchell communicated with her through applications on his smartphone, and she contacted the police.

Upon being advised of his rights, Mitchell invoked his right to counsel. Investigators later contacted him to search his smartphone. At trial, the military judge granted the defense’s motion to suppress the contents of Mitchell’s phone, which he had unlocked and given to an investigator at his commander’s office.

United States v. Edward Mitchell is significant because it involves the unsettled question of whether there are Fifth Amendment constraints on law enforcement asking or requiring a suspect to unlock a smartphone. The U.S. Air Force, the Electronic Frontier Foundation, and the American Civil Liberties Union have also filed amicus briefs in the case.

Flynn argued that there are two reasons that the Court of Appeals should vacate the military judge’s decision to suppress the contents of Mitchell’s phone. 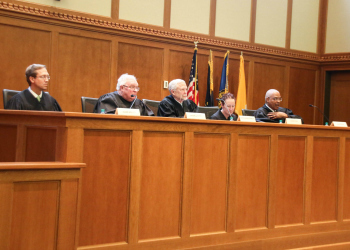 One reason, Flynn said, is that Mitchell entering his passcode to unlock his phone is not an “act of production” protected by the Fifth Amendment. Two cases upon which Mitchell relies – Fisher v. United States and United States v. Doe – involved the production of documents and computer files, not merely the entry of a passcode. While the concern in Fisher was that the act of producing documents might communicate incriminating facts, Flynn said the entry of a passcode simply unlocked and decrypted the phone. It did not communicate the existence, location, or authentication of any documents on the phone.

Second, he said, Mitchell’s action does not satisfy the three-part test for a violation of the right against self-incrimination. It was not a testimonial statement, it was not compelled, and it was not incriminating, Flynn said.

Judge Scott W. Stucky asked how Mitchell’s action was not compelled, considering that he was led to believe that investigators would be able to unlock his phone if he didn’t do so with his passcode.

“The result is the same,” Stucky said. “The government gets information it otherwise wouldn’t have gotten.”

Flynn responded by saying, “The only thing the appellee disclosed was that he had access to his phone. All he did was give investigators access to the phone.”

Barceleau, arguing in support of Mitchell, the appellee, said the Court of Appeals should affirm the military judge’s decision regarding Mitchell’s phone.

He said that forcing Mitchell to recall from memory and disclose the secret passcode to open his phone constituted coerced testimony, just as disclosing the combination to a locked safe would be testimonial. And, he said, the forced disclosure of that secret passcode was incriminating.

Judge Ryan asked why the simple act of unlocking the phone was incriminating to Mitchell. Barceleau replied that the entry of the passcode was incriminating because requiring Mitchell to disclose information, by word or deed, produced a “link in the chain” of evidence, without which, investigators could not have accessed the contents of the phone.

Mitchell faced a “trilemma,” Barceleau wrote in his amicus brief. The suspect could disclose his secret passcode, which would furnish that essential link in the chain of evidence needed to convict him. He could lie and say he did not know or could not remember his passcode. Or he could refuse to obey the investigators’ direction while they were keeping him detained in his company commander’s office. The government’s tactics, he wrote, compelled Mitchell to be a “witness against himself” in violation of the Fifth Amendment. 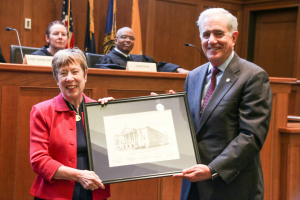 “The purpose of the Fifth Amendment,” Barceleau told the court Tuesday, “is to make sure the government assumes the full burden of prosecution.”

After the proceeding, the court’s judges answered questions from the audience of students in the courtroom. The students asked about a range topics, including questions about how the court operates and how to produce better legal writing.

At the end of the event, the court presented Nell Jessup Newton, the Joseph A. Matson Dean of Notre Dame Law School, with a framed lithograph of the historic federal courthouse where the U.S. Court of Appeals for the Armed Forces is located in Judiciary Square in Washington, D.C.

“The Law School is grateful to the court for giving our students this rare and valuable experience,” Newton said. “​Notre Dame’s respect for the military and its courts is longstanding and deep, and this week’s visit strengthened ​those ties even further.”