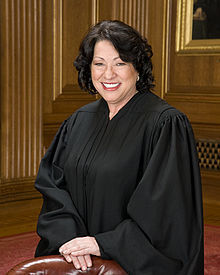 U.S. Supreme Court Justice Sonia Sotomayor will hold a conversation with Notre Dame law students Wednesday, September 2, from 12:30 to 1:30 p.m. in the Patrick F. McCartan Courtroom. She will talk with students about a variety of issues in the conversation moderated by Jennifer Mason McAward, associate professor of law and acting director of the Center for Civil and Human Rights.

Nominated by President George H.W. Bush to the U.S. District Court, Southern District of New York, in 1991, she served in that role from 1992 to 1998 and as a judge on the United States Court of Appeals for the Second Circuit from 1998 to 2009. President Barack Obama nominated her as an associate justice of the Supreme Court on May 26, 2009.

The Law School will hold a lottery for students to be seated in the McCartan Courtroom. An additional room will stream the conversation to enable other students to view the program.