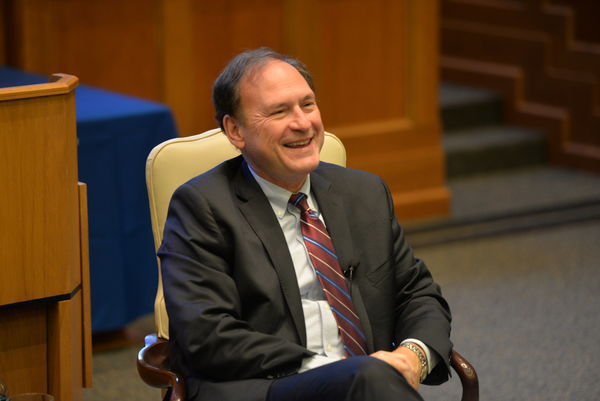 U.S. Supreme Court Associate Justice Samuel A. Alito, Jr., recently spent a day at Notre Dame Law School. The day was capped by a discussion in the Patrick F. McCartan Courtroom moderated by Professor William Kelley, followed by a reception with students. Earlier in the day, Justice Alito met with a small group of students to discuss ways of integrating one’s personal and professional lives, and then had lunch with another small group of students and faculty.

During the McCartan Courtroom session, students and faculty from across the University listened as Justice Alito weighed in on a number of legal questions and talked about his life and professional career. “Being able to hear a Supreme Court justice speak, shake his hand, and see him interact with others – beyond merely reading his opinions – adds a lot to our law school education,” said Michael Mercurio, a second-year student who attended the discussion. “It reminds you that there are people behind the paper – people whose experiences, ideals, and convictions guide the way they see the law.”

Students brought questions to the event on a variety of topics including the Justice’s thoughts on interpreting the Constitution and international legal systems.

Among the subjects Justice Alito addressed were his judicial philosophy in interpreting the Constitution, and his understanding of the role of the Supreme Court in our constitutional system. He also described his approach to interpreting statutes, and his understanding of the influence of international legal systems in American law. In addition, he detailed his process for deciding cases and writing opinions.

“While reading cases, it is sometimes difficult to read between the lines and understand the Court’s ‘why’ behind the ‘what,’” said Tim Dondanville, 3L and NDLS Student Bar Association President. “Listening to Justice Alito explain his approach to legal issues was an incredible opportunity to learn about how he proceeds through a case from the time it arrives on his desk to the time it becomes a published Supreme Court decision.”

Justice Alito concluded the discussion by encouraging students to think broadly about how best to use their legal training. Although our legal system, which Justice Alito characterized as fundamentally a good one, faces many challenges, he assured the students that there are ample opportunities to contribute to the profession.