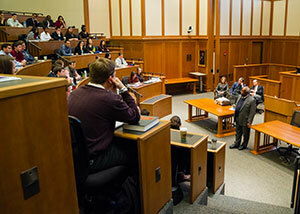 “All the students were really moved and touched by Justice Thomas’s generosity,” said Professor Nicole Stelle Garnett, who clerked for Justice Thomas in 1998-1999.

He and Professor Garnett held a public conversation in the Patrick F. McCartan Courtroom that touched upon the justice’s childhood influences, his respect for his fellow Supreme Court justices, his judicial philosophy, his expectations of his law clerks, and his hope that NDLS students will remain diligent in their commitment to the law and the legal profession. Over two days Justice Thomas spent significant time with NDLS student groups, including The Federalist Society and Black Law Student Association. He also taught Law of Education, Constitutional Law, and Federal Criminal Law classes. By popular demand, the Federal Criminal Law class was opened to all NDLS students. He also attended Mass on campus and met with a group of undergraduate students.

Justice Thomas was born in the Pin Point community of Georgia near Savannah on June 23, 1948. He attended Conception Seminary and received an A.B., cum laude, from Holy Cross College, and a J.D. from Yale Law School in 1974. He was admitted to law practice in Missouri in 1974, and served as an Assistant Attorney General of Missouri from 1974–1977, an attorney with the Monsanto Company from 1977–1979, and Legislative Assistant to Senator John Danforth from 1979–1981. From 1981–1982, he served as Assistant Secretary for Civil Rights, U.S. Department of Education, and as Chairman of the U.S. Equal Employment Opportunity Commission from 1982–1990. He became a Judge of the United States Court of Appeals for the District of Columbia Circuit in 1990. President Bush nominated him as an Associate Justice of the Supreme Court, and he took his seat October 23, 1991.

The Clynes Visiting Chair was created with a gift from the distinguished jurist and Notre Dame alumnus Judge James J. Clynes Jr. (’45). The benefaction reflects Judge Clynes’ strong interest in and dedication to promoting the ethics of litigation within the judicial process. The Clynes Visiting Chair may be held by honored members of the judiciary at both the trial and appellate levels, distinguished law professors, and prominent members of the bar to teach or conduct public lectures relative to the ethics of litigation or judicial decision making. Previous chairs have included Chief Justice John G. Roberts Jr. and Chief Justice William H. Rehnquist.