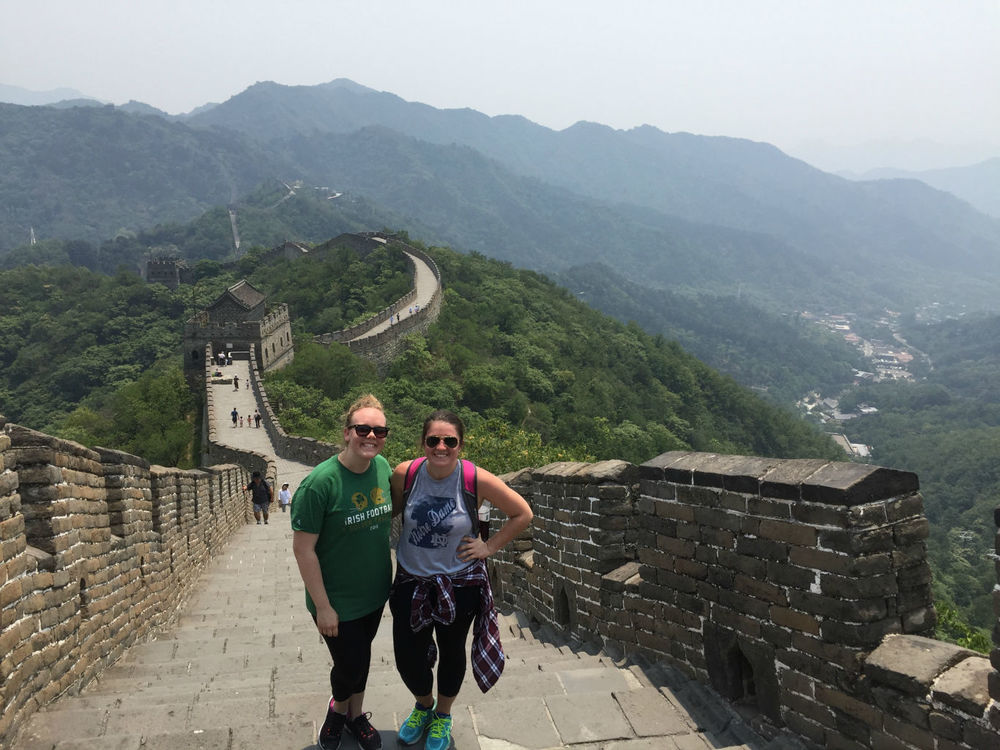 Shelby Niemann, left, and Lara Thiele, right, stand on the Great Wall of China during their internships in Beijing this summer. // Photo provided by Lara Thiele.

Lara Thiele and Shelby Niemann, 2L and 3L, respectively, were assigned to AnJie’s IP team, a group of around 30 attorneys. Niemann spent six weeks with the firm, while Thiele was there for four weeks.

AnJie serves international and domestic clients, but this summer was the first time the IP team at the firm hosted American legal interns.

The firm already had a Notre Dame connection, however. He Jing, a senior consultant and founding partner at AnJie, earned his J.D. at Notre Dame Law School in 2000. He taught in the intensive summer IP & Technology Law Program in 2016 in London and had Niemann in class.

“I really like to travel, and I’m very interested in IP work,” said Niemann, who studied abroad in Ireland as an undergraduate. “This was one of the few law firm experiences available that allows you to do exclusively IP all summer.”

Thiele and Niemann conducted research for the firm and spent time with the firm’s attorneys discussing the differences between IP law in China and the U.S. 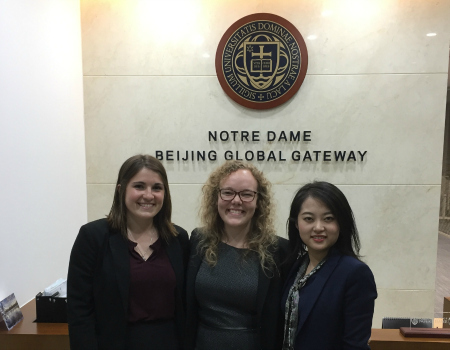 Lara Thiele, left, and Shelby Niemann, middle, stand in the Notre Dame Beijing Global Gateway with Liu Ya, a lawyer with the AnJie law firm, during their internships in Beijing this summer. // Photo provided by Lara Thiele.

“It was interesting, because the IP market in China is changing so fast,” Niemann said.

The pair also gave multiple presentations each week on American law and law schools in general, Thiele added. Around 20 attorneys from the firm attended these presentations, showing how much they valued the interns’ time. The two students were also invited to several world conferences in Beijing focusing on IP law.

“I went into it not knowing how much substantial work I was going to get, but we were busy every day with meaningful work,” said Thiele, who spent seven weeks in Thailand last summer.

In addition to working with the firm, Thiele and Niemann were able to travel on the weekends and took part in a company trip to hike in the mountains and see traditional Chinese theater. The pair also visited the Great Wall, among other historical locations.

“It’s nice to know there’s space for the Notre Dame community over there, too,” Niemann said.