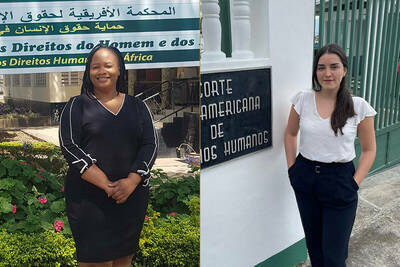 Both graduates decided to become lawyers after seeing unrest and human rights violations while growing up in their own countries. They were further called to human rights legal work after being part of Notre Dame’s LL.M. Program in International Human Rights Law.

Ngwalo began her clerkship for the African Court on Human and Peoples’ Rights — the Court established by African countries to ensure the protection of human and peoples’ rights in Africa — in September and has been busy since her first day.

She is assisting with the court’s case backlog, and has already prepared judgements for two cases. She will be researching applicable case laws and will prepare all of the required documents for the judges to use during hearings and deliberations. Another part of her clerkship is to follow up on whether member states are complying with the court’s decisions, and to provide updates on the progress of cases.

“I chose to study at Notre Dame because of the inspiration I got from a few human rights lawyers in Malawi who also studied at Notre Dame,” said Ngwalo. “The Law School has helped me to become a ‘different kind of a lawyer.’ I have been exposed to critical thinking about human rights and learned to recognize and affirm human dignity even in adverse circumstances. I am confident that my contributions to human rights work will make a difference in my country, continent, and worldwide.”

Before coming to Notre Dame, Ngwalo worked as a legal, human rights, and elections expert for election monitoring groups, including the African Union Commission, the International Republican Institute, the National Democratic Institute, and the Electoral Institute for Sustainable Democracy in Africa. She worked with women and marginalized communities, and her fieldwork took her to several African countries.

“We observe and monitor the pre, actual, and post elections situation and come up with reports if the countries complied with the principles of democratic elections,” said Ngwalo.

Ngwalo decided to become a lawyer because of the passion she has for the oppressed, especially women and children. She said that coming from an underdeveloped country her capabilities were often doubted and she faced injustices because she was a woman. She wanted to inspire and bring faith to other women who think they cannot make it because of their gender and socioeconomic background.

“I wanted to be part of bringing justice to women and children who are marginalized and who have their rights and dignity taken away in so many ways. I believe that if each one of us chooses to take a step in promoting human rights work, we will have a better world. While others chose medicine and teaching, I chose the noble field of law,” said Ngwalo.

Ngwalo also holds an LL.B. degree, and is admitted to practice law in all courts of Malawi.

“From the start, the LL.M. program at ND Law has been key in my career. Not only has it provided me with the great opportunity to clerk at the Inter-American Court, but it has also given me a comprehensive education in the human rights field and the development of critical legal writing and analysis skills,” said Suárez. “Furthermore, being at Notre Dame reinforced my commitment to human rights causes.”

During her time at Notre Dame she was a research assistant at the Kellogg Institute for International Studies. She was a semifinalist in ND Law’s first International and Comparative Law Writing Competition.

The atrocities Suárez saw growing up in her home country of Colombia, including horrible stages of internal armed conflict, was what led her to a career in law.

“I wanted to acquire the knowledge to be able to contribute to the prevention of more human suffering due to the war and to be able to help victims to obtain justice for the atrocities committed against them,” said Suárez. “When I was a law student I realized that international human rights law was a career path where I could achieve those goals.”

She previously worked at two human rights non-government organizations, People in Need and Dejusticia (also known as the Center for Law, Justice and Society). She also served as an intern at the Inter-American Court of Human Rights and at the Center for Justice and International Law. She received her law degree from the Universidad del Rosario in Colombia.

“The Notre Dame Human Rights LL.M. Program is proud of contributing to the work of our finest students to international human rights law courts and organizations, especially in these times of human rights perennially under siege around the world,” said Desierto.