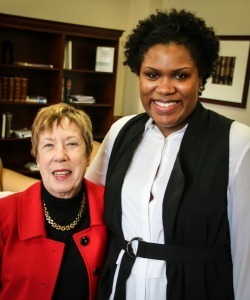 Tia B. Paulette, 2L, has been selected to receive the Peter Lardy Memorial Fellowship for the 2017-18 academic year at Notre Dame Law School.

“Tia’s classmates nominated her for this award to recognize a remarkably generous and compassionate student who represents the best of NDLS,” said Nell Jessup Newton, the Joseph A. Matson Dean of the Law School. “I am delighted that they did so and very happy for both Tia and the Law School.”

The Class of 1975 established the fellowship to honor their beloved classmate Peter A.R. Lardy, who died of cancer during his third year of law school. The award, which includes a substantial tuition remission for the recipient’s third year of law school, is dedicated “to those who exemplify his courage, love, and understanding toward his fellow man.” It has been awarded each year since 1976.

Paulette said she was overwhelmed when she heard that she had been selected to receive the fellowship.

“It’s an honor that I don’t take lightly,” she said. “When I read about Peter Lardy – that he was a great man around the Law School community, that he was suffering from cancer but was still so loving and caring – I was really touched that people thought I was worthy to be compared with someone like that.

“Being a Notre Dame Law student is a dream come true. I am so grateful.”

Paulette grew up in St. Louis and earned a bachelor’s degree in philosophy and political science with a multicultural certificate in 2015 at the University of Missouri.

She has been involved at Notre Dame Law School as president of the Innocence Project Club and as a member of the Student Bar Association, Moot Court, and the Black Law Students Association.

During the summer of 2016, she clerked for the U.S. Attorney’s Office for the Central District of Illinois in Urbana, Ill.

Paulette said she plans to pursue a career in public interest law.

“I love people,” she said. “One of the ways I can give back is by spending my career serving others.”