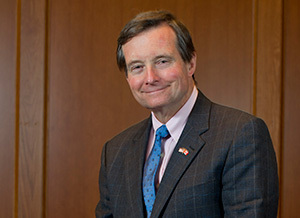 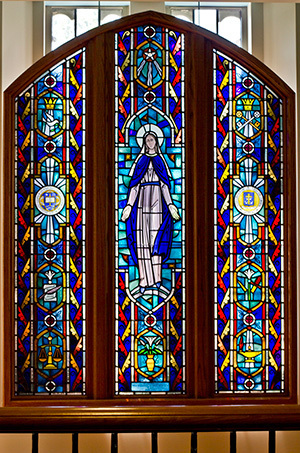 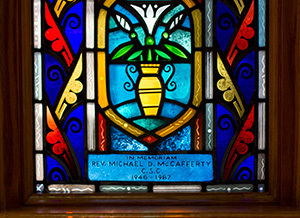 Notre Dame Law School is pleased to announce the generous support of the Rev. Michael D. McCafferty Law Fellowship by law alumnus Brian P. Short (’75 J.D.) and his wife Kathleen. Rev. Michael D. McCafferty, C.S.C. (ND ’70 and ‘73L) was a highly respected and well-liked member of the faculty and administrator of NDLS who died in 1987 just short of his 41st birthday from cancer. Prior to joining the faculty of the Law School, McCafferty was a trial attorney with the EEOC in Washington and a lawyer with a major law firm in Chicago. Father Mike, is the inspiration for the “Father Mike Show,” a long running show produced by NDLS students each year. “I think it’s very important to remember the people who came before us in any endeavor,” says Short. “Our success is built on the foundation laid by others. Fr. Mike was a friend of mine, he married my wife and me, he came to Minneapolis for my Dad’s funeral and we often ran throughout the campus when I would return to Notre Dame. He played a significant role in the life of Notre Dame and her students. He was an accomplished teacher, an able administrator and a wonderful resource during the 10 years he spent in Residence Hall Ministry, especially to those who lived in his beloved Dillon Hall.” As a way to honor Fr. Mike and his accomplishments, Short believed it was important to give back to NDLS in Father Mike’s name. “I hope all future McCafferty Fellows will learn about Mike, about his accomplishments and the effect he had on others and thus be inspired by Father Mike’s story and to make a difference in the lives of others.” Short concludes, “Life is about the stories of those who came before us.” In addition to remembering Father Mike through this endowment, Short’s gift provides for the restoration of the McCafferty stained-glass window. This window, formerly part of the old Law School Chapel, is now displayed near the entrance to Kresge Law Library on the second floor of Biolchini Hall of Law. “The window will remind everyone who enters the Law School of Mike and the role he played in the lives of the students, faculty and staff who were lucky enough to have been touched by his grace, says Short. “The endowment will provide for students who, hopefully inspired by Mike’s story, will go out to touch the world in ways which would make Mike proud.” Short, a longtime member of the Notre Dame Law Advisory Council, is chief executive officer of Leamington Co., a Minnesota based holding company with interests in transportation, community banking, agricultural production, and real estate. He also serves as a legal mediator and previously served as a United States Magistrate for the District of Minnesota. He received his undergraduate degree in economics from the University of Notre Dame in 1972 and J.D. from NDLS in 1975. His wife Kathleen, a graduate of the College of St. Teresa in Winona, Minnesota, is an RN and community volunteer.