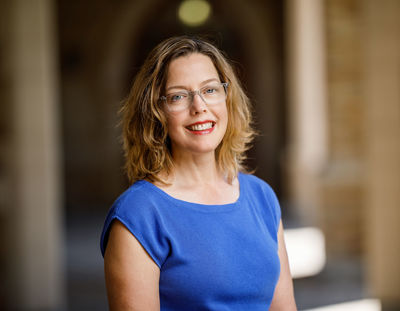 The Kroc Institute for International Peace Studies has launched a new podcast to highlight the research and peacebuilding work of institute faculty, alumni, students, and visiting scholars. Each episode of The Kroc Cast: Peace Studies Conversations will engage a current event or particular topic within the dynamic and multidisciplinary field of peace studies.

The first episode, released on Friday, August 23, is hosted by Mary Ellen O’Connell, the Robert & Marion Short Professor of Law at Notre Dame Law School and Research Professor of International Dispute Resolution at the Kroc Institute. O’Connell talks with George A. Lopez, Professor Emeritus of Peace Studies, about Professor O'Connell's new book, The Art of Law in the International Community (Cambridge University Press), and its implications for peace studies.

In a wide-ranging conversation, O’Connell and Lopez discuss ongoing conflicts in Yemen, North Korea, and Iran, explore the impact of the political ideology of realism, and explore strategies for limiting military force growing out of both international law and peace studies.

O’Connell’s book seeks to counter realism’s dominance in global politics by suggesting a reinvigoration of respect for international law through an appeal to aesthetic philosophy — the study of beauty.

“We see a widespread disrespect for the rule of law in the United States and around the world,” says O’Connell. “But human beings can move away from the self-interested concerns that are at the foundation of realism and materialism when we appeal to the beauty inherent in one another. We can care about the rule of law because we are able to care about, sacrifice and do things solely for the benefit of another.”

The podcast conversation with Lopez is the first in a series of four episodes hosted by O’Connell and exploring international law’s ability to counteract a default move toward the use of military force. The episodes will be released throughout the 2019-20 academic year. Future episodes include:

Other forthcoming episodes of The Kroc Cast include a conversation on immigration and global human migration crises hosted by Erin B. Corcoran, Executive Director of the Kroc Institute, and a conversation with Nobel Peace Prize laureate, Dr. James Muller, on the history and current status of nuclear disarmament movements hosted by Gerard Powers, Director of Catholic Peacebuilding Studies at the Kroc Institute.

All episodes of The Kroc Cast will be available for streaming at Apple Podcasts, Google Podcasts, TuneIn, and Stitcher and online at kroc.nd.edu/podcast.

About the Kroc Institute: The University of Notre Dame’s Kroc Institute for International Peace Studies, part of the Keough School of Global Affairs, is one of the world’s leading centers for the study of the causes of violent conflict and strategies for sustainable peace.