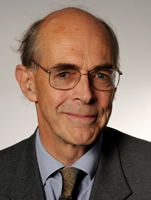 Oliver O’Donovan, professor of Christian Ethics and Practical Theology at the University of Edinburgh, will be at Notre Dame Law School April 11 to deliver the 2011 Natural Law Lecture.

Sponsored by the Law School’s Natural Law Institute, the free lecture will begin at 3:30 p.m. Monday, April 11, in Eck Hall of Law Room 1130. The public is invited.

Professor O’Donovan was Regius Professor of Moral & Pastoral Theology and Canon of Christ Church at the University of Oxford from 1982 until 2006, before which he taught at Wycliffe Hall, Oxford (1972-7) and at Wycliffe College, Toronto (1977-82).

He is a past President of the Society for the Study of Christian Ethics.

Ordained as a priest of the Church of England, he has been an active participant in ecumenical dialogue and has served on the General Synod.

He has been a Fellow of the British Academy since 2000.