John Schoenig had always felt called to work in education.

After earning his bachelor’s degree from Notre Dame in 1998, he taught English for two years at Holy Rosary School in Shreveport, La., as part of Notre Dame’s Alliance for Catholic Education program. Following his time in the classroom, he spent several years working on ACE’s administrative team and then helped launch a national education policy organization. 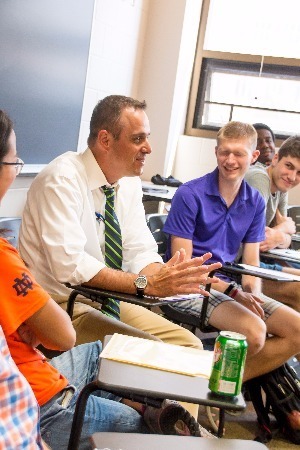 John Schoenig teaches in a class at the University of Notre Dame in September. // Photo by Alicia Sachau, Notre Dame Law School.

“Teaching ruined me for life,” Schoenig joked. “It awoke a passion in me.”

In the years after his service in Louisiana, Schoenig became increasingly captivated by big-picture education policy issues, such as the rationale behind school funding frameworks and the dearth of quality educational options in many disadvantaged communities.

He had toyed with the idea of law school as an undergraduate, but it wasn’t until 10 years later that he knew the time was right.

“I realized that going to law school would provide the best path for me to serve school children,” Schoenig said.

After graduating from the Law School in 2010, Schoenig returned to Notre Dame and currently serves as ACE’s senior director of teacher formation and education policy. He leads the ACE Teaching Fellows Program and its Program for Educational Access. He is also part of the ACE faculty.

He says his legal education impacts his life every day.

“Notre Dame Law School gave me the opportunity to lead an integrated life – both as a law student and as a professional,” he said. “That’s very uncommon today.”

Schoenig credits the outstanding faculty at the Law School for helping students both discover and pursue what animates them. “It’s an environment that gives you permission to fall in love with the law,” he said.