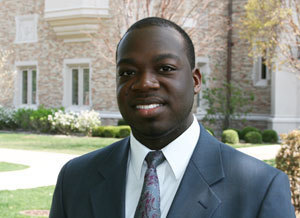 When Ashon McKenzie graduates from Notre Dame Law School in May, he will have already argued a case before one of the most respected judges and legal scholars in the nation—Richard Allen Posner of the United States Court of Appeals for the Seventh Circuit—thanks to his placement on the Appellate Moot Court Board. “I thought I would be nervous, but instead I was just really excited to get the chance to go toe-to-toe with one of the brightest legal minds alive today,” says McKenzie. “It was intense.”

McKenzie earned a spot on the Appellate Moot Court Board during his 2L year after excelling at the brief-writing and oral argument techniques he learned in his 1L Legal Writing Moot Court class on the subject. “Coming into law school, I thought my interest would be in securities regulation, and Notre Dame has a really strong securities regulation curriculum and faculty,” says McKenzie. “But once I got into the appellate work, I realized I had some interest in litigation and enjoyed thinking quickly on my feet and practicing good memory recall.”

Throughout law school, McKenzie has had an abundance of practical legal experience to complement his scholarship. He clerked for Judge Wayne Anderson the summer after his 1L year before spending the second half of his summer in the Notre Dame London Law Program, and split his 2L summer as a clerk for Cook County Circuit Court Judge Ronald F. Bartkowicz and an intern with the City of Chicago’s Corporate Counsel.

Following graduation, McKenzie will begin work for the Ohio Attorney General in Columbus. “It’s likely that I’ll be thrown into things right away at the AG’s office, so I’m grateful to have had such tremendous experiences throughout law school to prepare me,” says McKenzie.