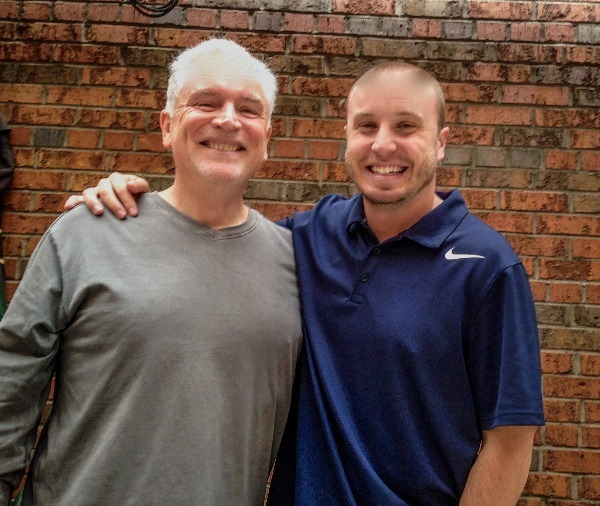 As far back as fourth grade, Riley Koval, ’16 J.D., would write in the back of his notebooks at school, “I will attend the University of Notre Dame.”

Raised as a Fighting Irish fan, he made annual trips to Notre Dame with his family to see a football game, attend Mass, and visit the Grotto of Our Lady of Lourdes.

So, when Koval was applying to law schools after graduating from Macalester College in Minnesota, Notre Dame was at the top of his list. At the same time, he and his father, a police officer, worried that Notre Dame Law School would be a big financial stretch.

When Koval received his acceptance letter, he was also given a three-year fellowship that would offset a portion of his law school costs and make it possible to pursue his dream.

In his first year, Koval went to a thank-a-donor event to show his gratitude to those who support Notre Dame Law students.

Steve Mackey, ’76 J.D., and his wife, Jana, were also attending the event. Steve Mackey is a former executive vice president, general counsel, and chief administrative officer at Helmerich & Payne in Tulsa, Okla. The Mackeys have underwritten a fellowship at Notre Dame Law School since 2010.

“One of the Law School’s strengths is its insistence that all its students should view the law as a means for improving society in whatever way they think they can best accomplish that goal,” Steve Mackey said. “Our fellowship hopefully allows a student to embrace that mission and have the ability to choose a career based on what he or she wants to do, not what they have to do for financial reasons.”

Koval and the Mackeys happened to be sitting together at the thank-a-donor event, and the three of them immediately hit it off. They had a natural rapport with each other as well as some things in common – Koval and Steve Mackey both played football while growing up, and the Mackeys’ daughter was completing an internship in Madison, Wis., which is Koval’s hometown.

When Steve Mackey mentioned that they didn’t know who their scholarship award recipient was for the year, Koval said he would go find out.

“The people running the event told me that Riley Koval was the recipient of the Mackeys’ fellowship, and I just said, ‘Well, I definitely know him,’” Koval said. “When I returned to the table and said we’re a match, the Mackeys jumped out of their seats, gave me a big hug, and Jana Mackey said, ‘That’s perfect because we already love you.’”

The bond grew stronger during Koval’s next two years of law school. The Mackeys always took him out to dinner while visiting campus. During one of those dinners in Koval’s second year, the Mackeys asked if he was taking out loans to pay for costs that the fellowship did not cover. When Koval said he was, the Mackeys told him they wanted to pay the remainder of what he owed for his final year of law school.

“Riley is truly a ‘different kind of lawyer’ who will have a meaningful impact on his colleagues, community, and the University. As a fellowship recipient, Riley has a personal connection to what it means to give back. We are excited to see how he will use his time, talents, and resources to benefit others in the future,” Steve Mackey said. “Riley has now become a part of our family, and we look forward to continuing that relationship for years to come. Our fellowship has truly been a gift that gives back in ways we could never have imagined.”

For Koval, the feeling is mutual.

He said the the Mackeys haven’t become a second family to him; he feels like they’re part of his immediate family. The Mackeys traveled to Koval’s hometown just to visit his parents, and the two families coordinate which football games they attend each fall to make sure they see each other. 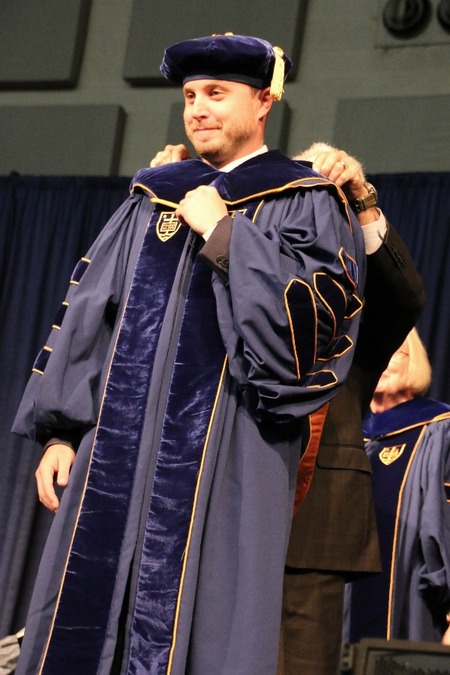 Steve Mackey not only was present for Koval’s law school graduation in 2016 but also “hooded” Koval at the ceremony. “It was a special moment that I’ll never forget,” Koval said, “and I’ll always be grateful for it.”

As a law student, Koval had the opportunity to work with the Notre Dame football team as a recruiting analyst, as a legal intern for the University of North Carolina Chapel Hill athletic department, and as a summer associate for the Minnesota Vikings general counsel office.

“I am so grateful for what Steve and Jana have given me,” Koval said. “They know that my route, my passion may not be lucrative, and by this very generous gift they have allowed me to pursue that passion.”

Since graduating from the Law School in 2016, Koval has worked in Notre Dame’s Office of Development as the assistant director of recognition societies.

“Having an understanding of development is crucial to being a well-rounded athletic director, so the position is both very fulfilling for me and also an incredible opportunity to learn from and work with the best development team in the country,” Koval said. “I love what I do because it allows me to give back to a school that gave so much to me and ensure that other students are able to enjoy the same experience I did at Notre Dame.”