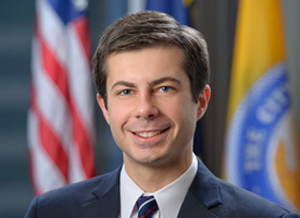 Mayor Buttigieg is the chief executive of the City of South Bend. The city’s thirty-second mayor, he was sworn into office on January 1, 2012. As mayor, Buttigieg supervises the enforcement of municipal codes and state laws, appoints and supervises department officers, and communicates with the Common Council on financial issues and policy affairs.

Buttigieg graduated from Harvard University in 2004. He worked for former U.S. Defense Secretary William Cohen in Washington, D.C. before he was awarded a Rhodes Scholarship to study philosophy, politics, and economics at Oxford from 2005 to 2007.

After obtaining a degree from Oxford, Buttigieg worked for McKinsey & Company, a top consulting firm, where he was responsible for advising senior business and government leaders on major decisions related to economic development, energy policy, strategic business initiatives, and logistics.

His work took him around the country and the world, including to Iraq and Afghanistan. Buttigieg is also an officer in the U.S. Navy Reserve.