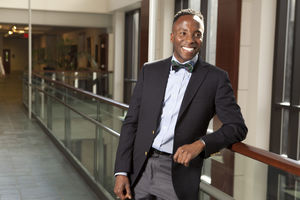 “I’m working on two articles,” Seymore said. “One explores the extent to which preexisting knowledge of an invention should defeat its patentability and the other addresses the problem of patents that claim inventions that do not work as described.”

Seymore’s research focuses on how patent law should evolve in response to scientific advances and how the intersection of law and science should influence the formulation of public policy.

During his visit, Seymore will also meet with faculty and students, said Mark McKenna, associate dean for faculty research and development, professor of law, and Notre Dame Presidential Fellow.

“Visiting scholars like Sean enrich our students’ experience by giving them access to leading scholars in the field,” McKenna said. “Students also gain the opportunity to learn about the scholars’ perspectives and experiences.”

Before law school, Seymore earned his bachelor’s degree in chemistry at the University of Tennessee, his master’s in chemistry from the Georgia Institute of Technology and his doctorate in chemistry from Notre Dame. Seymore developed a love for science and an interest in patents at an early age. In fact, he was introduced to the patent system while in elementary school.

“When I was nine years old I thought that I’d invented something new with my chemistry set,” he said. “So I sent President [Jimmy] Carter a letter describing what I had done and asking him to give me a patent on what I had created.”

Seymore’s decision to pursue law school, he said, came about after he began feeling dissatisfaction in his chemistry career. While his credentials are quite impressive – he was a visiting scientist in the Department of Chemistry at Indiana University-Bloomington and held assistant professor positions in the chemistry departments of Rose-Hulman Institute of Technology and Rowan University – he said his pivot to a career in legal academia has been gratifying.

“As a law student, Sean stood out for his love of ideas and deep engagement with legal scholarship,” said Nicole Garnett, John P. Murphy Foundation Professor of Law. “I think every paper he wrote in law school, including two that I supervised, he wrote with the goal of publication. Not surprisingly, he met that goal with both!”