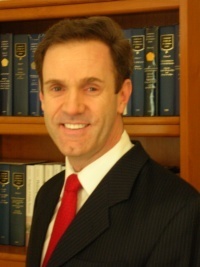 Samuel Gregg, director of research at the Action Institute for the Study of Religion and Liberty, recently visited Notre Dame Law School to discuss the rise in Euroscepticism, or a lack of faith in the European Union’s ability to bring about significant economic, social and cultural improvements.

During the talk, hosted by the NDLS Federalist Society, the author and co-author of several books including, Becoming Europe: Economic Decline, Culture, and How America Can Avoid a European Future, pointed to three critical issues lending to the region’s continuing downfall: a declining economy, the mass migration of religious refugees from non-Western countries who are unassimilated to a Judeo-Christian society, and the lack of a united cultural identity with a shared values system.

“I’m convinced most of the things that are happening in Europe will eventually make their way across the Atlantic,” Gregg said. “While debt and the failure to manage debt are the biggest problems, economic challenges don’t take place in a vacuum.”

Gregg also noted an emerging rule of law problem throughout Europe as a contributing factor to instability in the region.

“The rule of law is a central component of the common good,” he said. “Several European supranational institutions and governments seem to have inched toward something that Europeans, ranging from Aristotle and Cicero to Thomas Aquinas and Thomas More, have consistently underscored as unworthy of civilized societies: the rule of men.”

Gregg then shared that his sentiments regarding Europe’s struggles closely align with Charles de Gaulle, the French general and Prime Minister of France in the mid-1940s. De Gaulle once wrote that all of Europe’s countries “should come together to form a whole, with its own character and organization in relation to the rest of the world.”

The two men think that without a clear acknowledgement and deep appreciation of a common civilizational foundation, the goal of a pan-European integration could never be achieved.

The effort to be a multiculturalist society and seemingly politically correct is also lending to Europe’s unraveling, Gregg said. He shared that while European welfare states simply aren’t equipped to sustain the influx of Muslim refugees coming from the Middle East, and that certain strains of Islamic theology are feeding today’s terrorism, none of Europe’s public leaders have the courage to express such views.

“Is the Islamic religion, taken on its own terms, compatible with the values and institutions of Western culture?” he asked. “Imagine a Europe unafraid of insisting that it has a specific culture rooted in Judeo-Christianity and the various Enlightenments into which newcomers are expected to assimilate. Migrants entering such a continent would be likely to develop specific expectations of what it means to be European.

“Unless Europe is willing to affirm, defend, and promote its roots, it has no future beyond a dystopia of non-judgmentalism, managed decline, and increasing religiously inspired violence.”