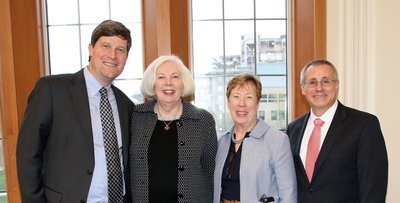 “I’m very humbled to be honored with this award as Father Mike was a dear colleague and friend of mine,” Mooney said. “I still remember to this day Father Mike’s favorite prayer: ‘Give us, Lord, the grace to work for the things we pray for.’”

Mooney was recognized with the award because of her devotion and outstanding service to the University of Notre Dame. Throughout her 36 years of service in Catholic higher education, NDLA board member Faccenda said, Mooney has displayed a deep commitment to excellence and serving the needs of students.

In her acceptance speech, Mooney spoke about how fulfilling her years were teaching at the Law School and complimented her faculty colleagues who brought their faith into their legal teaching.

“The faculty here have always been good people who wanted to use their abilities to do good in the world through educating Notre Dame lawyers,” Mooney said.

Mooney graduated from Saint Mary’s College in 1972 with a B.A. degree in English and received her J.D. from Notre Dame Law School in 1977. She practiced law from 1977 to 1978 as an associate in the Washington, D.C., office of Jones, Day, Reavis and Pogue.

During her tenure at the Law School, Mooney was a respected and popular professor and was voted Teacher of the Year by Notre Dame law students in 1983.

Mooney took the helm at Saint Mary’s College on June 1, 2004, and is the College’s first lay alumna president. She will retire from the position on May 31.

Under her leadership the College formed three new graduate programs, increased its financial endowment, and significantly diversified its student body.

“I have to say that with as impressive an administrative career as Carol has had, it is clear when you listen to Carol and watch her actions that, for Carol, it has always been about the students,” Faccenda said.