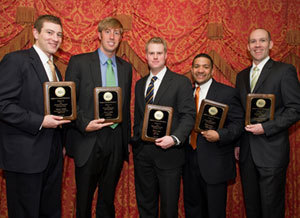 The American College of Bankruptcy selected 3L Ryan Dattilo as the 7th Circuit’s 2010 Distinguished Bankruptcy Law Student. Along with four distinguished students from other judicial circuits, Dattilo was an honoree of the College at its annual meeting in Washington, D.C., March 11-13, 2010. He was recognized at the outset of the College’s educational program and attended the College’s annual induction ceremony at the Supreme Court of the United States. “The most exciting part of the experience was to meet the major actors in some of the larger cases I had been studying over the past couple years, in particular the recent Lehman Brothers bankruptcy,” says Dattilo.

To be eligible for this honor, students must be recommended by either a College Fellow or a professor, after which they undergo a rigorous nomination process. Each nominated student must have outstanding academic credentials and an interest in bankruptcy law. All of the nominated students are considered by the circuit council of their circuit, which selects the winning student.

Notre Dame Adjunct Professor of Law Daniel Murray, who is a member of the College, recommended Dattilo and served as his mentor at the meeting. “Ryan attended the College’s annual meeting and participated fully, says Murray, who is a senior partner at Jenner & Block and serves as chair of the firm’s bankruptcy, workout and corporate reorganization practice and teaches an advanced course on corporate restructuring at NDLS. “It was an excellent learning experience for him, and he made some personal contacts which will stand him in good stead when he completes his clerkship with Chief Judge Mary Walrath in Delaware. Ryan is a really superb representative of Notre Dame Law School.”

Dattilo completed both the general bankruptcy and advanced corporate reorganization courses offered at Notre Dame Law School and served as a research assistant to Peter C. Alexander, a visiting professor of law at Notre Dame who is also a member of the College. “Having active practitioners like Professor Murray teaching at Notre Dame Law School really provides a timely, first-hand view of the constantly changing issues in the bankruptcy field,” says Dattilo. “I was actually in Professor Murray’s class the day Lehman Brothers filed for bankruptcy. His class helped me follow what was going on in the news at that time attentively and with a more complete understanding.”