Through the generosity of the Regelbrugges, three additions of rare books were recently made to The Roger and Dorcas Regelbrugge Family Endowed Collection in Natural Law of the Kresge Library. The books span the dates from 1592 to 1760.

The Roger and Dorcas Regelbrugge Family Endowed Collection in Natural Law supports the study of legal theory with a long and honorable history in the Law School. As the home of the Natural Law Institute and The American Journal of Jurisprudence, and as a center for the study of law and religion, the Law School has always required significant library holdings in natural law. Through the generosity of the Regelbrugges, who established their collection to stimulate awareness and interest in the fundamental mission and destiny of mankind and the divine guidelines for success, this collection will ensure that these holdings will increase and that the study of natural law will continue to be integral to the Law School’s work. For additional information on the endowment and others, see the Kresge Library Endowment web page.

Below are titles and descriptions of the books. Eventually, they will be on display in the Rare Books Reading Room located next to the Circulation Desk. 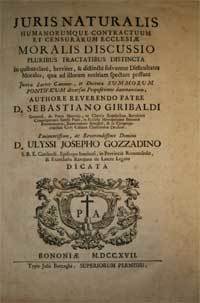 Only edition. Although it never went through later editions, this was a fairly influential work that was cited often into the twentieth century (in such works as the Catholic Encyclopedia). It is divided into four books: De Justitia et Jure, De Restitutione, De Contractibus, De Censuris et Poenis Ecclesiasticis. Little is known about Giribaldi, a cleric and canon lawyer who worked in Bologna. This work was reissued as the third and final volume of a collected-works edition, Universae Moralis Theologiae (1735). OCLC locates 5 copies, 4 in North America 2 in law libraries (Harvard Law School and Library of Congress). Not in the BMC or Ferreira-Ibarra. 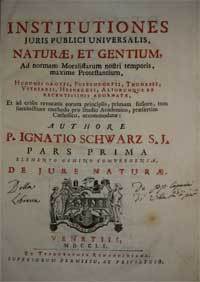 Third and final edition. Schwarz, a Jesuit, was a professor of history at the University of Ingolstadt, a notable center of Catholic learning. First published in Regensburg in 1741, Institutiones Juris Publici Universalis is a treatise on natural and international law. It is notable for its Catholic perspective and critique of the dominant Protestant perspective of the day established by such Dutch and North-German jurists as Grotius and Pufendorf. Its second edition. 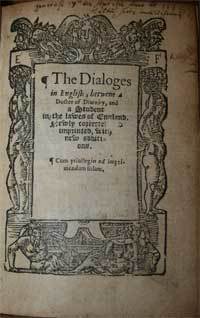 St. Germain [German], Christopher [?1460-1540].
The Dialoges in Englishe Betwene a Doctor of Divinity and a Student in the Lawes of Englande. Newely Corrected and Imprinted With New Additions. [London: In Aedibus Richardi Tottelli, 1575]. 177

Originally written in Latin in 1523, this work contains two dialogues between a doctor of divinity and a student of English law. It popularized canonist learning on the nature and object of law, the religious and moral standards of law, the foundations of the common law and other issues regarding the jurisdiction of Parliament. A very important work in the development of equity, Doctor and Student appeared in numerous editions. An authority well into the eighteenth century, it infl uenced several writers, including Blackstone. OCLC locates 7 copies in North America of Beale T476. This is an unrecorded variant (see Betwene; Divinity; With; Additions_; as above) Beale T476 (_Betweene; Divinitie; Wyth; Addicions; as in T476). ESTC S11636.