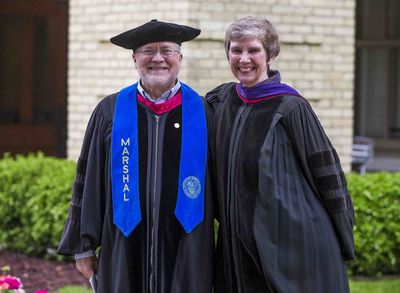 The Law School’s 2018 commencement ceremony on Saturday was the last for two Notre Dame Law School professors who are retiring this summer.

Professor and labor law expert Barbara J. Fick has chosen her beloved City of Philadelphia for her new home and base of operations as she pursues her lifelong love of travel and good food. Professor Douglass Cassel will be relocating to New York, where he will sample retirement while carrying on as counsel on matters of business and human rights with the global law firm of King & Spalding.

“Barb and Doug have become part of the fabric of the Notre Dame Law School community, and we will miss them dearly,” said Dean Nell Jessup Newton. "I wish them both the very best in their retirements and in all their future endeavors.”

Professor Fick earned her B.A. from Creighton University in 1972 and her J.D. from the University of Pennsylvania in 1976. She joined Notre Dame Law School in 1983 after practicing labor law at the Milwaukee firm of Foley & Lardner and with the National Labor Relations Board in Philadelphia. At Notre Dame, Fick has focused her teaching and scholarship on the various aspects of labor law, including employment discrimination, individual rights in the workplace, and international and comparative labor law. From 1995 until 2009, she worked with the American Center for International Labor Solidarity, advising and teaching trade union leaders in Central and Eastern Europe on issues relating to protecting worker rights and ensuring domestic compliance with international labor standards.

She has served as a member of the Executive Board of the U.S. branch of the International Society for Labor and Social Security Law and as a faculty fellow at Notre Dame’s Institute for International Peace Studies and the Higgins Labor Studies Program.

In 2005, she won the University’s Grenville Clark Award in recognition of her professional focus on understanding and improving the position of the worker in society.

Well known for mentoring numerous Notre Dame Law students who went on to pursue successful careers in labor law, Professor Fick also worked closely with the American Bar Association to educate the public about employment law and workers’ rights, serving for many years as the ABA Preview of United States Supreme Court Cases’ contributing editor for labor and employment Law, and writing The ABA Guide to Workplace Law, published first by Times Books and subsequently by Random House.

Outside the classroom, Professor Cassel has worked tirelessly on behalf of human rights throughout the Americas. He has served as a consultant for the Organization of American States and the United Nations, including as a legal advisor to the UN Commission on the Truth for El Salvador from 1992 to 1993. He has also represented victims of human-rights violations in Bolivia, Guatemala, Peru, and Venezuela in cases heard by the Inter-American Commission on Human Rights and the Inter-American Court of Human Rights.

Professor Cassel recently played a crucial role in the talks that led to Colombia’s government and the Revolutionary Armed Forces of Colombia, or FARC, forging an agreement in 2016 to end that country’s half-century of civil war. His many awards include the Order of Merit, conferred by the Republic of Colombia in recognition of his work in helping to negotiate the transitional justice component of that peace agreement. Most recently he was presented with Notre Dame’s 2017 Grenville Clark Award in recognition of his voluntary efforts to advance the cause of peace and human rights.