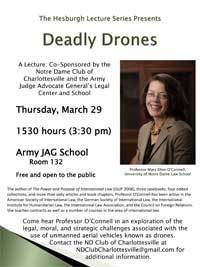 Professor Mary Ellen O’Connell is giving two talks next week on the legal and ethical issues raised by drone warfare. One will take place at the “Ethics of Assassination” symposium at the University of Richmond March 27 and is likely to be featured on C-Span. The other, “Deadly Drones,” is a March 29 Hesburgh lecture at the Army JAG School in Charlottesville, Va. It is being co-sponsored by the Notre Dame Club of Charlottesville and the Army Judge Advocate General’s Legal Center and School.

She teaches contracts as well as a number of courses in the area of international law.