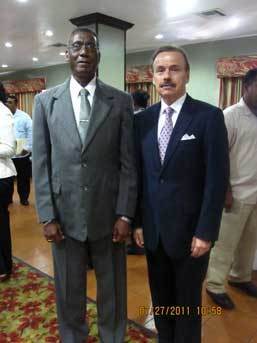 Professor Gurulé was asked to head an evaluation team and draft the report on behalf of the American Bar Association’s Rule of Law Initiative (ROLI), which is seeking to examine the status and role of prosecutors within the legal systems of emerging democracies or transitioning states.

Belize is a strategic partner with the United States in combating transnational crime in the Caribbean, including international drug trafficking, and Professor Gurulé’s report (the Belize Prosecutorial Reform Index report) is intended to guide and strengthen efforts to reform Belize’s criminal justice system.

In attendance at the July 27 event were U.S. Ambassador Vinai Thummalapally, Justice Adolph Lucas and other members of the Belize judiciary, the Belize Attorney General and other high-level Belize government officials, the President of the Belize Bar Association and representatives of the embassies of Mexico and Honduras.

Professor Gurulé also participated in a training program on ethics for Belize prosecutors and was interviewed by Belize media for news stories available on the websites for "Open Your Eyes" (Belize’s version of “Good Morning America),” 7 News Belize and Belize News 5.