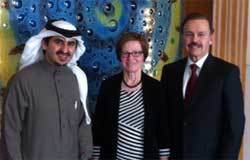 The trip was funded by the State Department and American Bar Association Rule of Law Initiative to support Bahrain’s newly adopted zero tolerance policy toward “torture, inhuman treatment and degrading detention” of political prisoners, which includes detaining them without judicial process. An independent commission found that police tortured and used excessive force against civilians arrested during protests that followed successful uprisings in Egypt and Tunisia last year. 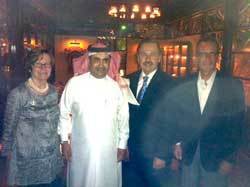 During the trip Professor Gurulé toured the country’s major prison and visited with Bahraini’s Attorney General, Minister of Justice, Chief Justice of the Supreme Court, and senior members of the Ministry of the Interior, as well as human rights lawyers and political prisoners. (Photo: Judge Laughrey, Paul Simonett (the ABA representative assigned to the Middle East), Jimmy Gurulé, and the AG)

He will now evaluate current legislation and procedures that allow for judicial monitoring of detainees and make recommendations on how the legislation and procedures should be improved or amended. He will also make recommendations on the establishment and operations of a Special Prosecution Unit to investigate and prosecute allegations of government-sponsored torture.

Professor Jimmy Gurulé is a former assistant U.S. Attorney General, former Undersecretary for Enforcement for the U.S. Treasury Department, and an internationally known expert in the field of international criminal law.

More information about Professor Gurulé is available here as well as on his NDLS faculty page.