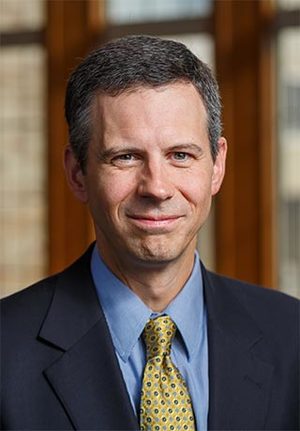 “Professor Bellia is loved and admired by our class and has been since our 1L year,” said Amy Povinelli, 3L and President of the NDLS Student Bar Association. “He serves the Notre Dame Law School community in many capacities — as a professor, role model, mentor, and friend.

“Professor Bellia embodies the mission of NDLS and teaches students a deeper understanding of what it means to be a different kind of lawyer.”

For Bellia the feeling is mutual.

“It has been a privilege to work with the Class of 2015 and witness its countless accomplishments — in academics, advocacy, and professionalism — as well its contributions to the spirit of commitment and friendship that defines our student body,” Bellia said. “It is equally a privilege to represent my faculty colleagues, whose wisdom and decency I join our students in so cherishing.”

Bellia’s scholarship focuses on the federal constitutional structure and analyzes how the relationships between and among the states, the federal government, and foreign nations play out in constitutional law, the law of federal courts, and foreign relations law. His published works in these fields include numerous law review articles, and he has also authored Federalism, the first casebook on U.S. Federalism.

In the fall of 2014, he was named the inaugural O’Toole Professor of Constitutional Law, an Endowed Chair funded by a significant gift from Judge Thomas W. and Elaine S. O’Toole to support the study and teaching of constitutional law at Notre Dame Law School.

He also practiced law as an associate with Miller, Cassidy, Larroca & Lewin in Washington, D.C., litigating constitutional, criminal, and commercial cases in state and federal courts.