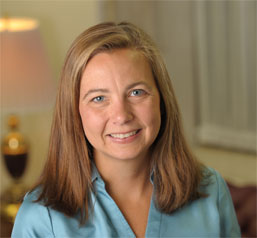 The Federalist Society for Law and Public Policy Studies will present the prestigious Paul M. Bator Award to Notre Dame Law Professor Nicole Garnett. The award recognizes a young academic—under the age of 40— who has demonstrated excellence in legal scholarship, a commitment to teaching, a concern for students, and who has made a significant public impact. She will be honored at the Federalist Society’s annual National Student Symposium on Feb. 28 at Yale Law School.

The award was established in 1989 in memory of Professor Bator, a renowned scholar and teacher of federal courts and constitutional law. He taught at Harvard Law School from 1959 to 1982 and from 1983 to 1985, and at the University of Chicago from 1985 until his untimely death in 1989. He also served as Principal Deputy Solicitor General in 1982 and 1983.

Garnett served as a law clerk for the Honorable Morris S. Arnold of the United States Court of Appeals for the Eighth Circuit (1995-1996) and for Associate Justice Clarence Thomas of the United States Supreme Court (1998-1999). She also worked for two years (1996-98) as a staff attorney at the Institute for Justice, a nonprofit public-interest law firm in Washington, D.C.

Garnett’s primary research interests include property, land use, and local government law and education reform. She is a Fellow of Notre Dame’s Institute for Educational Initiatives and, from 2008-2010, a Provost Fellow. During the spring 2007 semester, Garnett was a visiting professor of law at the University of Chicago Law School.

The Federalist Society for Law and Public Policy Studies is a group of conservatives and libertarians interested in the current state of the legal order. It is founded on the principles that the state exists to preserve freedom, that the separation of governmental powers is central to our Constitution, and that it is emphatically the province and duty of the judiciary to say what the law is, not what it should be. The Federalist Society seeks both to promote an awareness of these principles and to further their application through its activities.