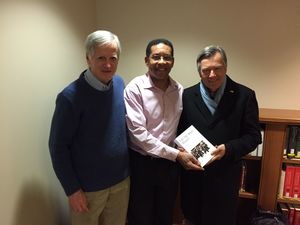 Ed Gaffney Jr, professor and former dean of Valparaiso Law School (1990-97), and Doug Kmiec, former dean of Catholic University (2001-2003) and current Pepperdine Law School professor, returned to campus on Dec. 1 to attend the funeral of Prof. Bob Rodes. The next day, Prof. Kmiec stopped by the library to donate a copy of his book, Lift Up Your Hearts. Doug Kmiec was a member of the NDLS faculty from 1980-99. Ed Gaffney served on the NDLS faculty from 1977-83. An experienced jurisprudence professor, Prof. Gaffney took over the second section of Jurisprudence during Prof. Rodes’s absence.

Once head Legal Counsel to President Reagan, Doug Kmiec “is credited with helping win a sizeable Catholic majority in key electoral states for Barack Obama in 2008. He served two years as U.S. Ambassador to the Republic of Malta.” Lift Up Your Hearts is a “poignant recounting of the cost paid for his Obama support as well as the tragic deaths that now shape the rest of his time on earth.”