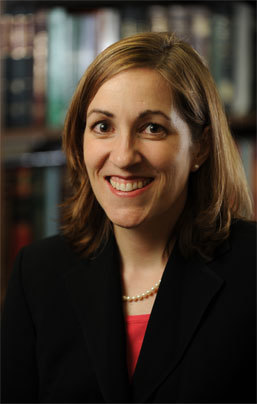 Notre Dame Professor of Law Patricia Bellia, the new chair of the University of Notre Dame’s Faculty Board on Athletics, has excelled at the highest levels of collegiate athletics and academics, giving her firsthand experience in her new position.

A Division I tennis player at Harvard University, Bellia was elected to the University of Notre Dame’s Faculty Board on Athletics in 2005 and became chair Aug. 1.
“When I first arrived at Harvard, I was convinced that I couldn’t play a sport and perform well academically,” she said. “I didn’t play on the tennis team during my freshman year, and I soon found out that the opposite was true; that I couldn’t perform as well academically without playing a sport as I could with one.

To read the entire article, click on the link below.
http://newsinfo.nd.edu/news/12254-bellia-brings-practical-experience-to-new-role

A member of the Notre Dame faculty since 2000, Bellia teaches and conducts research in the areas of constitutional law, administrative law, cyberlaw, electronic surveillance law, and copyright law. She is a co-author of a leading cyberlaw casebook and has published several articles on Internet law and separation of powers.