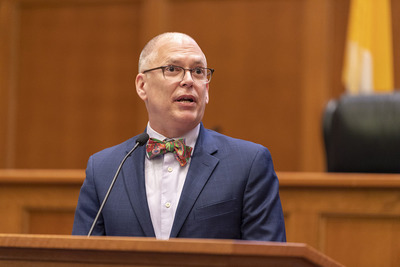 Jim Obergefell, the named plaintiff in the landmark Supreme Court case Obergefell v. Hodges, spoke at Notre Dame Law School on Wednesday, March 27, as part of an event that examined the court’s 2015 decision that guaranteed the right of same-sex couples to marry.

M. Patricia Hackett ’81, ’83 M.A., ’91 J.D., a practicing attorney and adjunct professor at the Law School, introduced the topic by noting other historic cases that concerned marriage rights and explaining how those cases fit into the arguments that led to the Obergefell decision. She highlighted similarities with Loving v. Virginia, a Supreme Court decision in 1967 that struck down state bans on interracial marriage.

In addition to Obergefell, two other plaintiffs — Greg Bourke ’82 M.A. and Michael DeLeon, a married couple from Kentucky — also spoke at the event.

Professor Hackett commended the students who organized the event by saying, “We are preparing students to receive a license in the law and to be held accountable to the rule of law that extends far beyond Notre Dame. A license that will be within a pluralistic, constitutional democracy.”

Hackett said law students will be officers of the court, counselors, and advocates, and it is crucial to understand the law as an organic reality and the lives of their clients. 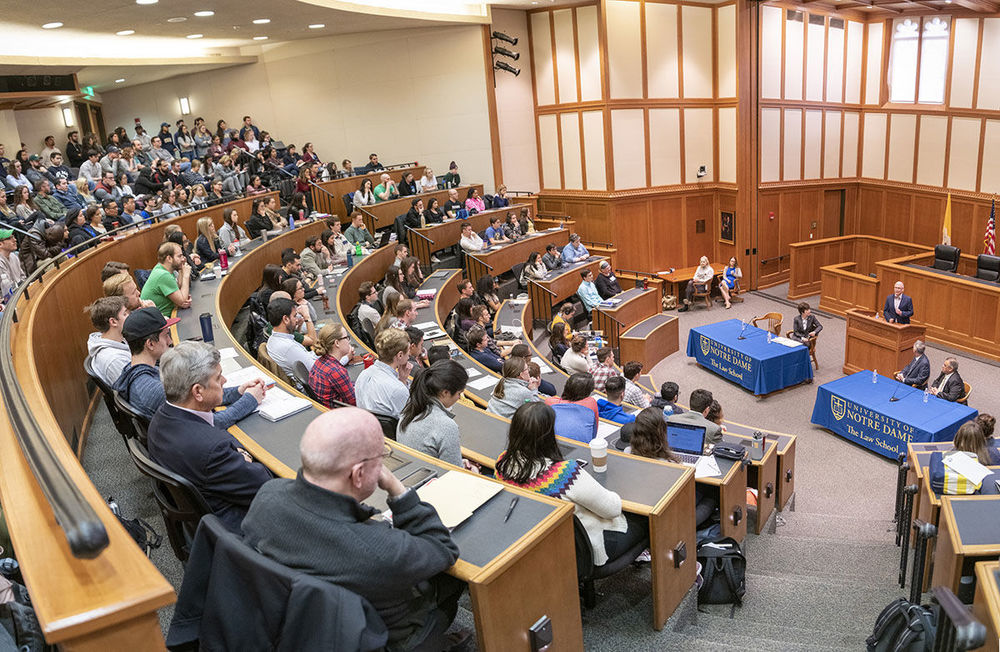 Jim Obergefell and his longtime partner, John Arthur, were married in Maryland in 2013 after the Supreme Court struck down Section 3 of the federal Defense of Marriage Act. The decision still allowed individual states to decide whether to allow same-sex marriages.

“We made a commitment to marry only when it carried legal weight,” Obergefell said. “It was a moment in time when one level of our government said, ‘We see you. You matter.’”

Obergefell explained that he and his husband, who was terminally ill with Lou Gehrig’s disease, had no intention of filing a lawsuit until a civil rights attorney informed them that Arthur’s death certificate would list him as unmarried due to Ohio’s state constitutional amendment that banned same-sex marriage.

“We had not thought of it that way — in the context of John’s last record as a person,” Obergefell said.

They sued the state of Ohio in the U.S. District Court for the Southern District of Ohio on the grounds that the state was discriminating against same-sex couples who had married lawfully in another state.

Obergefell admitted it was a scary thought to sue the state, but he said, “It was simply the right thing to do. There was no reason why our lawful marriage should not be recognized by the state of Ohio where we pay taxes and where we were productive members of society.” 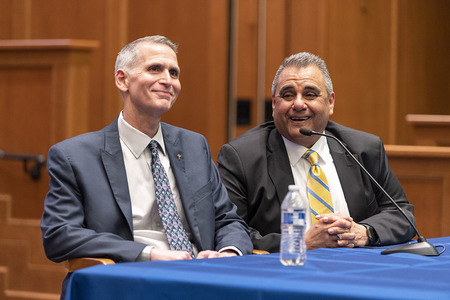 They won the case, and Arthur died a few months later with Obergefell listed as his spouse on his death certificate. However, the state appealed the decision, and the Obergefell case was combined with Bourke and DeLeon’s case, Bourke v. Beshear, and other same-sex marriage lawsuits in the U.S. Court of Appeals for the Sixth Circuit.

Bourke and DeLeon had filed their lawsuit a few years earlier because they both wanted to be listed as parents on their adopted children’s birth certificates. The couple had married in 2004 in Canada, but their union was not recognized in their home state of Kentucky.

On Wednesday at the Law School, Bourke and DeLeon reflected on their lives as practicing Roman Catholics. Bourke earned his master’s degree in sociology at the University of Notre Dame. Active and supported in their Louisville parish, both men said they filed the lawsuit because they wanted dignity and respect and the acknowledgment that their relationship matters.

Federal District Courts ruled in favor of all the plaintiffs in Obergefell, Bourke, and the multiple cases subsequently consolidated in the U.S. Court of Appeals for the Sixth Circuit. The Sixth Circuit, however, reversed.

On June 26, 2015, the Supreme Court ruled 5-4 that state bans on same-sex marriage were unconstitutional under the due process and equal protection clauses of the 14th Amendment.

“The power of our case is that we helped make an abstract legal argument about marriage rights real. We made it human,” Obergefell said. “Everyone loves someone, and everyone loses someone they love.”

For the aspiring lawyers in the room, Hackett added, “It is important to hear from plaintiffs like Jim, Greg, and Michael because it is their humanity, their experience of family and children, which should deeply inform the jurisprudence of the court. The point of law is justice for all, not the few. The challenge for us as lawyers is how that is best developed and implemented and how we bring not our voice, but the voice of our clients to the courtroom.”

A video of the entire event is embedded below.