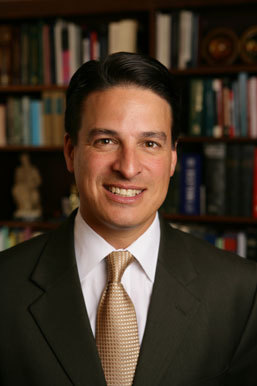 Dean Nell Jessup Newton has appointed Professor Paolo Carozza as the new Director of the Law School’s Center for Civil and Human Rights. He had been serving as the Interim Director of the CCHR in his capacity as Associate Dean for International and Graduate Programs.

The Center for Civil and Human Rights, established nearly 40 years ago by Rev. Theodore Hesburgh, C.S.C., has over the years acquired a strong reputation as one of the premier programs for educating human rights lawyers from all parts of the world. In announcing Carozza’s appointment, Dean Newton noted that, “The Provost and I are committed to strengthening and expanding the Center for Civil and Human Rights, and to making it an even more prominent center for teaching and research on global justice. With the aim of realizing the vision that he had when he first created the CCHR, Father Hesburgh is also committed to help in any way that he can. We are looking forward to working with Paolo to help him secure the resources necessary to lead the CCHR to that goal.”

An internationally-recognized scholar in the areas of comparative law, human rights, and international law, Professor Carozza also was a member of the Inter-American Commission on Human Rights from 2006 to 2010, and he served as its president in 2008-09. At NDLS, Professor Carozza founded and directs the Law School’s innovative and interdisciplinary Program on Law and Human Development, which will be joined to the Center for Civil and Human Rights as part of the CCHR’s broadened scope. “The Center and its work embody values at the heart of the University’s mission,” Carozza remarked. “We have an opportunity and a responsibility to make Notre Dame an even more vital community of knowledge and learning on human dignity, justice, and the common good throughout the world. I am honored and excited to be entrusted with that ambitious vision, which builds on the successes of my predecessors.”

Professor Douglass Cassel, who led the CCHR from 2005-2011, will continue to contribute actively to the work of the center as a member of the law school’s core international law faculty.