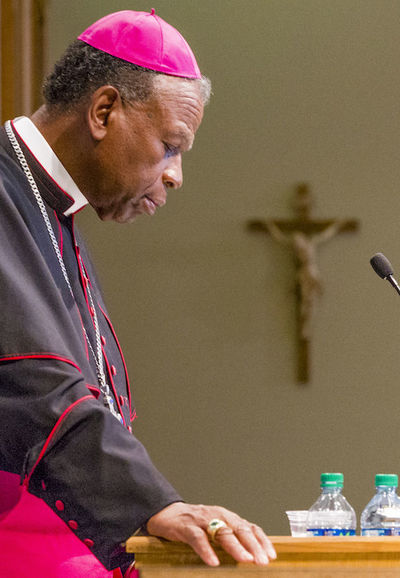 The Most Reverend Edward K. Braxton, bishop of the Diocese of Belleville, Ill., will examine key elements contributing to the racial divide in the United States and the emergence of the Black Lives Matter movement from the perspective of the Catholic Church when he speaks later this month at Notre Dame Law School.

The lecture, titled “The Catholic Church and the Racial Divide in the United States,” is The Dean’s Lecture on Race, Law, and Society for this spring semester. The event – scheduled for 12:30 p.m. on Wednesday, March 21, in 1130 Eck Hall of Law – is presented by Notre Dame Law School and co-sponsored by the Catholic Peacebuilding Network, the Center for Civil and Human Rights, and the Kroc Institute for International Peace Studies.

The bishop is a leading voice in the Catholic Church addressing the racial divide in the United States. He earned his Ph.D. in religious studies and his S.T.D. in systematic theology, summa cum laude, from the Pontifical Faculty of the Catholic University of Louvain in Belgium. He has served as the William A. Coolidge Professor of Ecumenical Relations at Harvard Divinity School and as a member of the theology faculty at the University of Notre Dame, the Pontifical North American College in Rome, and the Catholic University of America.Bishop Braxton will explore the reasons why only a small number of African Americans are Catholics. (Just 2.9 million out of nearly 70 million American Catholics are African Americans.) He will also discuss the “all lives matter” vs. “black lives matter” debate and the negative impact of the erroneous expressions “minorities” and “minority groups.” He will conclude by exploring the question of what the Catholic Church can do to help bridge the racial divide.

Bishop Braxton later served as director of Calvert House, the Catholic student center at the University of Chicago, and as official theological consultant to William H. Sadlier Inc., a leading New York-based publisher in the field of Catholic religious education. He is the author of several books and his writings on a wide range of theological and pastoral topics have appeared in the Harvard Theological Review, Theological Studies, Louvain Studies, The Irish Theological Quarterly, America, Commonweal, The National Catholic Register, The National Catholic Reporter, and many other journals.

Bishop Braxton was a priest of the Archdiocese of Chicago when he was ordained the auxiliary bishop of St. Louis on May 17, 1995. He became the second bishop of Lake Charles, La., in 2001, and was installed as the eighth bishop of Belleville, Ill., in 2005.

In 2015, Bishop Braxton issued his pastoral letter, “The Racial Divide in the United States: A Reflection for the World Day of Peace 2015.” In 2016, he published the companion pastoral letter, “The Catholic Church and the Black Lives Matter Movement: The Racial Divide Revisited.” This was followed in July 2016 by his pastoral statements, “Moral Leadership in Action: All Lives Really Do Matter” and “There Are No Minority Voters.” In January 2017, he published “We, Too, Sing America: The Catholic Church and the Museum of African American History and Culture.” At the invitation of Peter Cardinal Turkson, prefect of the Vatican Congregation for the Promotion of Integral Human Development, the bishop presided over a session of the Vatican’s international conference marking the 50th anniversary of Pope Paul VI’s encyclical Populorum Progressio (On the Development of Peoples) in April 2017.

In September of last year, Bishop Braxton delivered the 10th annual Dorothy Day Lecture at Purdue University. Later that month, he addressed the faculty, staff, and students of the National Catholic School of Social Service at The Catholic University of America on “Horizons of Possibilities: The Racial Divide in the United States: Old Wounds Reopened.” In February, he delivered the address “Racial Justice and Peace in Our Day” at Northwestern University’s Sheil Catholic Center and the 12th annual Thomas Merton Lecture at Bellarmine University in Louisville, Ky. In Louisville, he spoke about Thomas Merton’s “Letter to a White Liberal” and Dr. Martin Luther King Jr.’s “Letter from a Birmingham Jail.”

Bishop Braxton’s lecture is free and open to the public. All are welcome to attend.