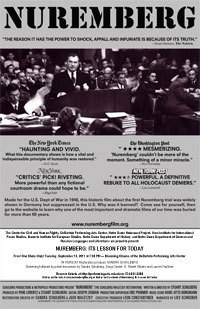 The 1948 documentary film “NUREMBERG: Its Lesson for Today” (The Schulberg/Waletzky Restoration) will be screened at 7:30 p.m. in the Browning Cinema at the DeBartolo Performing Arts Center September 13. The film, which shows how international prosecutors built their case against top Nazi war criminals using the Nazis’ own films and records, will be followed by a panel discussion featuring NDLS Professors Doug Cassel and Robert Blakey and ND History Professor Lauren Faulkner.

More information is available at the documentary film’s website.