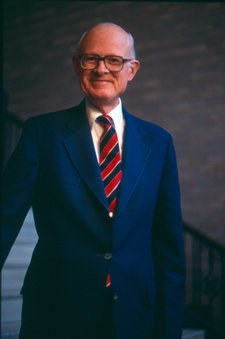 Professor Emeritus of Law Conrad Lawler Kellenberg died on April 8, 2016. He was 88. Kellenberg’s memorial service will be held on Monday, April 18, at 10 a.m. at St. Joseph Chapel at Holy Cross College.

As a native New Yorker, Con Kellenberg earned his A.B. from St. John’s University in 1949 and his J.D. from Columbia Law School in 1952. He also studied as a graduate fellow at Yale University from 1958 to 1959.

After completing his legal studies, Con served as a legal officer in the U.S. Air Force Judge Advocate General’s Department and worked for a private law firm in New York City from 1953-1955.

In 1955, he joined the faculty of Notre Dame Law School. He devoted almost his entire professional life to the Law School, serving fifty years as a member of our faculty.

Former colleagues, students, and friends remember Con for his friendliness, deep commitment to students, passion for helping others, and love of the law.

“He was the most accessible and friendly person,” said Professor John Robinson. Robinson said the two met when he was a graduate student studying philosophy at the University of Notre Dame. He said they bonded over their shared interest in environmental law.

“When people think about Con, it was his warmth and spontaneity that I think comes to mind first.”

During his time at Notre Dame, Kellenberg became a pioneer of the Law School’s clinical education services. He served as founding director of the Notre Dame Law School Neighborhood Legal Services Program, which is now known as the Clinical Law Center. He also served on Notre Dame’s Third World Relief Fund. The fund was designed to support private agencies assisting the poorest sections in Africa, Asia, and Latin America.

“It was the only context in which I can remember him ever asking anyone for anything,” said Professor and former Dean Patricia O’Hara. “Together with other members of our faculty, he used his expertise in property law and housing to advance economic justice through various initiatives in the local community and around the world.”

During the Civil Rights movement of the 1960s, Kellenberg and other Notre Dame Law School faculty were instrumental in redrafting the housing code for the city of South Bend to remove provisions permitting or requiring segregated housing.

His dedication to empowering marginalized communities made a significant impact on his students.

“He was the heart and soul of the legal aid clinic,” wrote Professor Jim Seckinger ’68 J.D., who was one of Kellenberg’s students. “Conrad’s students were ready to practice law because he helped them learn the fundamentals and develop a zeal to learn the rest in practice. Conrad Kellenberg served as a model for how to grow and evolve as a person.”

His teaching experience also included visiting professorships at the University of East Africa in Dar es Salaam, Tanzania, and the University of London, where he was the first director of the Notre Dame London Law Center.

Throughout his career, several professional and academic institutions recognized his work and dedication. He was awarded a Sterling Fellowship at Yale University and a Fulbright Fellowship for his work at the University of East Africa. In 1974, he was named Outstanding Reservist in the Strategic Air Command and retired from the United States Air Force with the rank of Lieutenant Colonel after many years of legal service. In 1974, he received the University of Notre Dame Grenville Clark Award in recognition of his community service, which advanced the cause of peace and human rights.

In 2005, Con retired from the University. In recognition of his service, Notre Dame Law students established the Conrad Kellenberg Award. It is awarded annually to a Notre Dame Law School graduating student who has dedicated substantial time to the betterment of the community through service.

“Together with our other emeriti faculty, Con left deep footprints that those of us privileged to be here now strive to fill,” said Professor O’Hara. “We will miss him deeply.”

I was very sorry to learn of the passing of such a dear and good man. Although Con had already retired when I joined the faculty, I got to know him during our annual lunches with the retired faculty and he always had something positive to say about the Law School that he loved so much and served so well.

A funeral liturgy will be held 10 a.m. Monday, April 18, at St. Joseph Chapel at Holy Cross College in Notre Dame, Ind. A private burial service will be at Cedar Grove Cemetery on the University of Notre Dame campus.