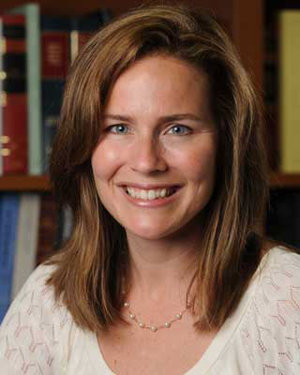 This week, Notre Dame Law will host the Advisory Committee on the Federal Rules of Appellate Procedure at its Chicago facilities. Professor Amy Coney Barrett, Diane and M.O. Miller, II Research Chair in Law, is a member of the committee.

The committee will meet Thursday and Friday Oct. 29-30 at the Notre Dame Law Suite on Michigan Ave. The committee, which consists of a small group of judges, law professors, and practicing lawyers, studies the operation and effect of the rules of practice and procedure applicable in the federal appellate courts. Barrett was appointed by U.S. Supreme Court Chief Justice John Roberts to the Advisory Committee on Appellate Procedure in August of 2010 and is serving her second three-year term.

“We are all proud of Professor Barrett’s stellar service on the Advisory Committee and delighted that the group is able to meet in our new Chicago facilities,” said Dean Nell Jessup Newton. “I know my colleagues join me in wishing everyone a great and productive meeting.”

Advisory committees evaluate suggestions for amendments to the federal rules. Any proposed amendment must be approved by the Standing Committee, the Judicial Conference, and, ultimately, the Supreme Court. If the Supreme Court promulgates a rule, it becomes effective unless Congress enacts legislation that rejects or modifies it.