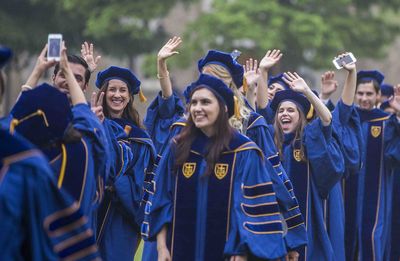 This past weekend, the graduates of Notre Dame Law School’s Class of 2018 celebrated their achievements, reflected on friendships built and lessons learned, and gave thanks for their many blessings.

While a commencement ceremony marks the end of an era in students’ lives, it also marks the beginning of much more.

At the class prayer service Saturday morning at the Basilica of the Sacred Heart, the Law School’s chaplain, Rev. Pat Reidy, C.S.C., confessed that he and his fellow resident assistants wrote their names in Sorin Hall’s attic before they graduated from the University in 2008. 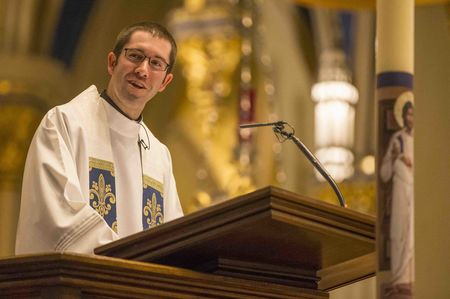 “I’m sure we figured that nobody would ever see it, and I think we were OK with that. We just needed to know that our names were there, that all our memories counted for something, that we left our mark somehow,” Reidy said.

“One of my favorite ethnographers – a guy from Nashville named Jason Aldean – describes the feeling perfectly,” Reidy said. Then he entertained the Basilica audience by singing the chorus of Aldean’s “Tattoos on This Town.”

It sure left its mark on us, we sure left our mark on it
We let the world know we were here, with everything we did
We laid a lot of memories down, like tattoos on this town

“It wasn’t until graduation that I realized just how much of my life had been marked by Notre Dame. It marked my life. It tattooed my heart,” Reidy said.


Click on these links to see photo galleries from the Class of 2018’s Prayer Service and Hooding and Diploma Ceremony.

On Saturday afternoon, the Law School held its 148th Hooding and Diploma Ceremony at the Joyce Center. The Law School conferred 204 J.D. and 41 LL.M. degrees to the Class of 2018.

The class selected the Honorable Amy Coney Barrett of the U.S. Court of Appeals for the Seventh Circuit as the Distinguished Professor of the Year. Judge Barrett, who earned her J.D. from Notre Dame in 1997, has been a member of the Law School’s faculty since 2002. The U.S. Senate confirmed her as a judge for the Seventh Circuit in October.

In her address to the graduates, Barrett talked about the power of words – especially in law.

“Words are our essential tool of the trade,” she said. “Accountants work with numbers, doctors work with the body, lawyers work with words. Words bring contracts to life, they transfer property, they give force to statutes and judicial opinions.”

Barrett encouraged graduates to use their new “superpower” wisely.

“Choose your words wisely. If they reflect what’s good and what’s true, don’t be afraid to say them,” she said. “Don’t speak recklessly, but speak fearlessly.” 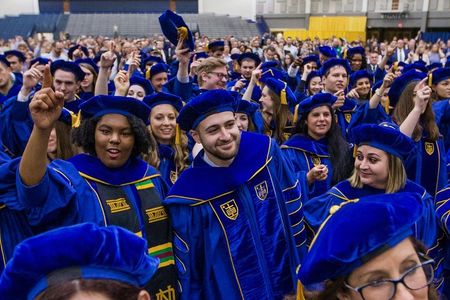 Members of the Law School’s Class of 2018 sing the Alma Mater, “Notre Dame, Our Mother,” at the Hooding and Diploma Ceremony on Saturday, May 19, at the Joyce Center.

Barrett added that the words the graduates use will reflect who they are, but that doesn’t mean their words should be all about themselves.

“Diseases are named after the doctors who identified them, so we have Down syndrome and Alzheimer’s disease,” she said. “The same is true of inventions, so we have Braille and pasteurization.”

But legal cases are different.

“Cases are not named after the lawyers who litigated them or the judges who decided them, but after the people on whom they had the greatest effect,” she said.

“The law was developed for people – for the flesh-and-blood people you will now serve,” she said. “And all of you, whether full time or pro bono, should use the legal language that you now know to be a voice for the voiceless.”

The Law School’s three most prestigious awards were announced during the Hooding and Diploma Ceremony.

Brent Murphy of Biloxi, Mississippi, received the Law School’s highest honor – the Colonel William J. Hoynes Award. The award is named for Notre Dame Law School’s first dean and is presented annually to the member of the graduating class who has the best record in scholarship, application, deportment, and achievement. 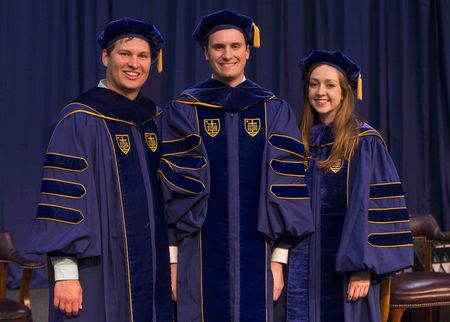 Murphy was editor-in-chief of the Notre Dame Law Review during the 2017-2018 academic year. He earned his B.A. in political science with a minor in theology from Notre Dame in 2015.

After graduation, Murphy will clerk for the Honorable Paul J. Kelly Jr. of the U.S. Court of Appeals for the Tenth Circuit and then Judge Barrett in the Seventh Circuit. Judge Kelly earned his B.B.A. at Notre Dame in 1963.

Mary Katherine Hickey of Mechanicsburg, Pennsylvania, received the Dean Joseph O’Meara Award. The honor is presented annually to a member of the graduating class for outstanding academic achievement.

Hickey served as executive managing editor of the Notre Dame Law Review during the 2017-2018 academic year. She was the Class of 2018’s recipient of the Conrad Kellenberg Award for Community Service and the H. King Williams Award, which is presented each year to a graduating student who has made a significant contribution to building community at the Law School. She earned her B.A. in history from Villanova University in 2015.

After graduation, Hickey will clerk for the Honorable Charles R. Wilson of the U.S. Court of Appeals for the Eleventh Circuit. Wilson earned his B.A. at Notre Dame in 1976 and his J.D. from the Law School in 1979.

Mathew Hoffmann of Calgary, Alberta, received the Farabaugh Prize for high scholarship in law. The award was established by Gallitzin A. Farabaugh, a South Bend attorney.

Hoffmann was a note and submissions editor for the Notre Dame Law Review during the 2017-2018 academic year. He served as an assistant rector in Keough Hall during his second year at the Law School. He graduated from Georgetown University in 2014 with a double major in chemistry and government. He will return to Washington, D.C., this fall to work at Jones Day.