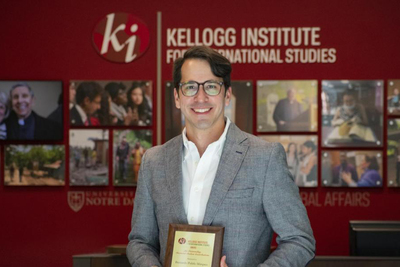 The award carries a $500 prize and recognizes a doctoral student affiliate for outstanding contributions to the intellectual life of the Kellogg Institute for International Studies. Pulido Márquez is currently a Dissertation Year Fellow with the Kellogg Institute, which provides funding for an academic year for students to do field research or complete writing their dissertations.

Pulido Márquez, a former human rights activist in Venezuela, has defended political prisoners, including opposition leaders, and worked to reestablish the rule of law and democracy.

Notre Dame Law Professor Paolo Carozza, who directs the Kellogg Institute and has worked closely with Pulido Márquez, described him as a “lively, engaged” participant in Kellogg projects and events throughout his time at Notre Dame.

“Bernardo’s work on Venezuela and on the rights of political participation are at the heart of Kellogg's mandate,” Carozza said. “He is generous with his time for others – sharing his knowledge, reading their work, and helping to think through the thorny questions of democracy and human rights together. That is a model of what we want our intellectual community at Kellogg to be like all the time.”

Pulido Márquez was nominated for the award by Kellogg Ph.D. Fellow Tomás Gold because of his sustained and deep involvement with the Kellogg community, including his participation in workshops, works-in-progress seminars, and his organization of several activities to discuss the crisis in Venezuela, including a 2019 panel.

“In this way, he has contributed to advance intellectual debates and discussions,” Gold wrote in his nomination letter. “He has proven to be a very generous colleague, providing feedback even on topics that are far from his own research interests, and always being willing to talk about his areas of expertise and discuss politics in Latin America and beyond.”

Pulido Márquez’ dissertation, “When Someone Decides Before the Voter: Inadmissible Restrictions to the Right to Stand for Election,” asks: Who should be allowed to run for political office, and what candidate eligibility restrictions should be allowed? His research focuses on how those restrictions have impacted elections within Latin America.

“The easiest election for an incumbent is the one who has no challenger or where the challenger is really bad,” he said in a video about his work. “Therefore, it has been a no-brainer for less-than-democratic leaders to try to chose their opponents and decide the elections even before the ballot is printed. These candidate restrictions are imposed under a veil of legality and are disguised as qualifications.”

Pulido Márquez earned a law degree from Universidad Cátolica Andrés Bello in Caracas, Venezuela, and a master in the science of law from Stanford Law School.

Originally published by Ashley Rowland at kellogg.nd.edu on June 1, 2021.