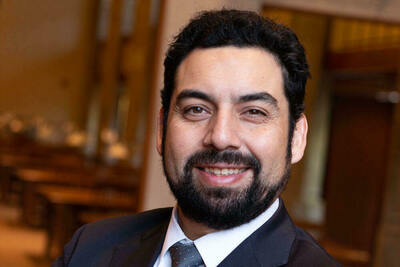 Jorge Barrera Rojas, a student in Notre Dame Law School’s J.S.D. program, recently represented 15 senators before the Chilean Constitutional Tribunal — the country’s highest court — resulting in a landmark ruling that protects the right of parents to educate their children.

Barrera Rojas represented the senators against the Children’s Rights Guarantee Protection System Bill, a bill presented to Congress under Chilean President Michelle Bachelet’s administration in 2015. According to Barrera Rojas, the claim the senators made states the initiative inverted the “priority” of the right of parents to educate their children guaranteed by the Chilean Constitution — and the Universal Declaration of Human Rights — in favor of the progressive autonomy of children. At the same time, the bill intended to exclude religious sexual education, imposing a “secular and non-sexist” education for all.

Last week, the court reviewed the case and granted the claim 6-4. The opinion was issued Tuesday.

Barrera Rojas said the case is considered landmark in the realms of education and constitutional law because it is the first time that the “priority” element of parental rights contained in the Chilean Constitution is tested as the “minimum core” of the right of parents to educate their children. In the same way, it will be the first time that “secular state” provisions would be tested.

“An old Chilean Constitutional Tribunal precedent in 2008 established that ‘priority’ does not mean ‘exclusivity’ of parents in cases of information provided to minors by the state for contraception counseling purposes,” Barrera Rojas said. “This case is quite different, considering that progressive autonomy is a general principle of interpretation which directly affects the right of parents to educate their children, and not only a real and concrete case, such as healthcare counseling for children was in 2008.”

Therefore, Barrerra Rojas said, it is a very important precedent in defense of parental rights and its “priority” over the state, groups, and other people’s actions.

“The same happens with secular education and religious freedom,” he said. “The Constitutional Tribunal has allowed the use of the concept ‘secular’ in the past, but only if the rule expressly contains that secular means ‘respectful of all religious expressions.’ The last phrase was not included in this new bill, and for the first time the constitutionality of a ‘purely secular state’ in education is tested.”

Barrera Rojas has worked as a legal advisor for numerous charitable and political organizations on issues ranging from education to constitutional reform, as well as having represented Chilean senators and deputies in several other parliamentary writs before the Chilean Constitutional Court.

Barrera Rojas is currently a professor of constitutional and administrative law in the Universidad San Sebastian, School of Law and Government, Chile, and practices law as a senior associate in the law firm Bofill Mir & Alvarez Jana. In 2018, the president of Chile appointed Barrera Rojas as a member of the Council of Evaluation for the Public Education System, which has the power to improve and amend public education reform in K-12 schools. He is also a Ph.D. in Law candidate at University of Paris 1, Pantheon-Sorbonne, and assistant professor of constitutional law and Constitucional Justice Clinic at the University of Chile. He will co-teach the course "International Religious Freedom" with Dr. Ana Maria Celis at Notre Dame Law this fall.

Barrera Rojas was recognized in 2017 as one of the 100 Young Chilean Leaders in his capacity as a constitutional law attorney. His J.S.D. research focuses on adequate education as a fundamental right in a comparative law perspective. He emphasizes how to establish a minimum standard of compliance and effective remedies for the right to education in the Chilean domestic law.