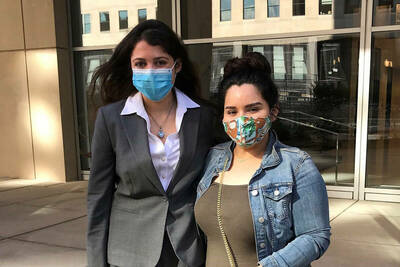 A young mother and child from El Salvador were granted asylum in the United States last week, thanks to the legal advocacy of Notre Dame Law School student Sophia Aguilar.

Aguilar, a third-year law student, worked with her client through the Law School’s National Immigrant Justice Center externship. Her client fled gender violence in El Salvador and came to the United States several years ago with her son, then a toddler.

In early 2021, Aguilar began preparing her client’s case as a National Immigrant Justice Center extern by writing her affidavit, gathering supporting evidence, and finding family members who might write affidavits on her behalf. This summer, her client had the opportunity to move up her court date to seek relief from the courts. At the Chicago Immigration Court on September 9, Aguilar presented opening and closing statements, conducted the direct examination of her client, and engaged in oral argument on the parameters of asylum law against the Department of Homeland Security attorney. The judge granted asylum based on Aguilar’s legal arguments, the strong and consistent testimony of her client, and the abundant supporting evidence included in the record.

“Our client took that opportunity and finally had a chance to tell her story,” Aguilar said. “She gained the protection she has been seeking for herself and her son. Our client can now live in peace in the United States with her son.”

Aguilar said it was “incredibly humbling” to be entrusted with helping to tell her client’s story.

“She is an incredibly brave woman,” Aguilar said of the client. “This was consistently reinforced each time I met with her, and I feel privileged to have been a part of the team that shared her story with the court.”

Lisa Koop, adjunct professor of law and associate director of legal services at the National Immigrant Justice Center, commended Aguilar for her efforts in helping her client.

“Sophia took on representation in this matter while our client meetings were entirely remote and she did a masterful job building rapport with her client over Zoom,” Koop said. “Sophia demonstrated a strong understanding of complex asylum issues at court and had prepared her client so effectively that the client was able to testify clearly and consistently, even under cross examination. Sophia did outstanding work on this case and her commitment, compassion, and exceptional skill resulted in safety and legal protection for her client and her client’s young child.”

Aguilar credited the externship for giving her the practical skills necessary to complete the work, but also the knowledge of underlying laws and policies affecting how and when the courts grant asylum.

“I was truly able to engage with the legal claims that we were submitting to the court as well as to suggest new ones. The NIJC externship encouraged me to think critically about what we were arguing, and Professor Lisa Koop was always soliciting our feedback and thoughts on the case’s — and our client’s — progress,” Aguilar said. “This engagement took my learning beyond an average experiential course, and it helped remind me why I wanted to be a lawyer in the first place.”

Aguilar said she expects that asylum and immigration petitions will be part of her pro bono law practice after graduation.

“I feel incredibly grateful for the opportunity given to me both by the NIJC and Notre Dame Law School,” Aguilar said. “As both a first-generation American and a Salvadoran American, I know how lucky I am to be where I am. I am humbled to have had a chance to give back to my community in this manner, and I look forward to helping more in the future.”