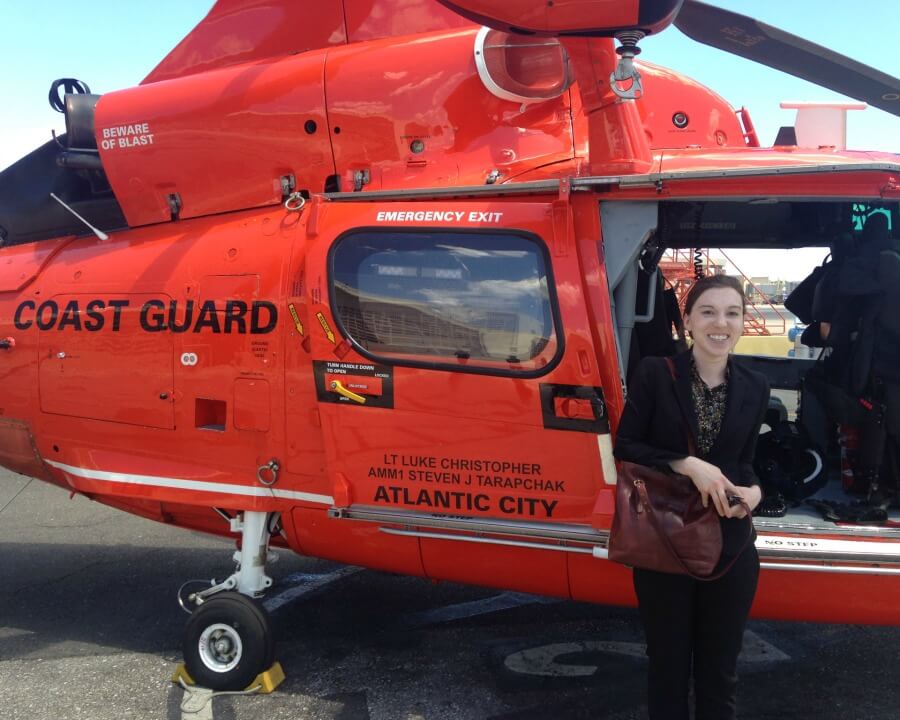 Not every legal internship comes with the opportunity to see a helicopter up close and personal, but that’s what Kelly Anderson saw this summer in Washington, D.C.

Anderson, 3L, found herself touring a Coast Guard Sector, a Coast Guard Air Station, the Library of Congress, the U.S. Supreme Court, the U.S. Capitol, and DEA Headquarters at Quantico during her summer internship with the U.S. Coast Guard Office of the Judge Advocate General, known as CGJAG.

“The Coast Guard made all of us interns feel extremely welcome at headquarters,” Anderson said. “It was a wonderful experience working for them.”

Her duties varied depending on the daily needs of the office, she said. She did quite a bit of legal research on a variety of international and constitutional law issues, including sanctions, First Amendment issues, immigration implementation, legislative history, customs authorities, and drones, producing written summaries in different forms. She also produced several documents, including a memorandum, a shell bilateral agreement, and a report, for offices outside of her own at CGJAG.

Legal Research and Legal Writing were two Notre Dame Law School classes that prepared her for her internship, she said. International Law, Carriage of Goods by Sea, and Admiralty Law also proved to be valuable for background preparation.

“Professor Randy Kozel’s Free Speech class was also extremely helpful. He said at some point in the class that everyone should study First Amendment law because you really never know when you’ll come across a First Amendment issue, and I cannot emphasize enough how right he was,” Anderson said. “I’m so glad I took that class before this summer.”

She emphasized that the internship gave her the best idea of what serving in JAG would be like, and anyone looking into JAG with any of the armed services should seek out an internship.

“If you’re on the fence about which service you’re interested in, I’d really recommend looking at the Coast Guard,” Anderson said. “I loved how close knit they are, their sense of mission and service, and I think the variety of work they offer is an amazing summer internship experience.”