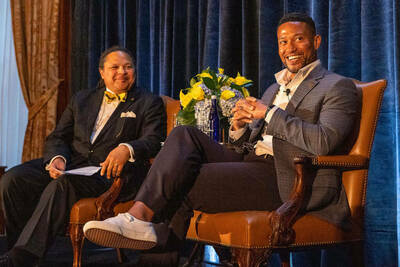 Notre Dame Law School hosted an event for New York alumni on June 22, 2022, at the Union League Club in Manhattan. The special guest for the evening was Marcus Freeman, the Dick Corbett Head Football Coach at the University of Notre Dame.

"I said, 'I want to be a head coach at some point and what university would help me to get to that point better than anywhere else in the country?' And I knew that was the University of Notre Dame," said Freeman when asked about his reasons for coming to South Bend.

In a 30-minute conversation with Joseph A. Matson Dean and Professor of Law G. Marcus Cole, Freeman discussed topics ranging from College Football Playoff expansion, to the NCAA transfer portal, and how name, image, and likeness (NIL) rules have affected recruiting players.

"If you do the things you are supposed to do and you become a great football player, you can benefit off of your name, image, and likeness here with our brand better than anywhere else in the country, but if you are going to choose a school based off of what you think you can make, Notre Dame's not place for you," said Freeman when asked how he addresses NIL when recruiting players.

Freeman went on to say he hopes that student-athletes don't lose sight of the benefits of academia because of NIL. "What I do with our players is continue to remind them of the privilege it is to go to a place like Notre Dame," he said.

"I do support expanding the Playoff and giving schools and teams the opportunity to compete for national championships," said Freeman.

Freeman also spoke about opening the 2022 season against his alma mater, Ohio State.

"What better way to see what kind of team you really have than to play against an unbelievable opponent?" asked Freeman. "It's going to be exciting for our players to have a great environment, to play a big opponent like Ohio State in primetime, but right now our focus has to be about us."

Watch the full conversation with Coach Freeman in the video below.