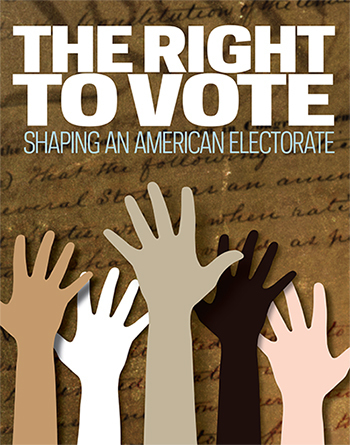 Notre Dame’s Center for Civil and Human Rights recently hosted a faculty panel discussion focused on engaging America’s political process through voting. The event, co-hosted by a cross-section of student organizations, brought out undergraduate and graduate students as well as members of the South Bend community.

“The world is watching America’s tumultuous presidential election,” said David Campbell, chair of the University of Notre Dame’s Department of Political Science. “While most of our attention is focused on who is winning and who is losing, it is equally important for us to ask who is voting.”

While Americans tout the right to vote as the cornerstone of democracy, a number of states across the country have recently passed measures making it harder for citizens to vote. Studies have shown these new rules — including voter identification laws, voter list purging, and cutting into the number of early voting days — have disproportionately affected low-income and minority communities.

“The enactment of voter identification laws in Republican-dominated states reflects partisan attempts to limit the voting influence of African Americans, Latinos, the elderly and lesser-educated, lower-income voters,” said Luis Fraga, professor of political science. “It’s hard to accept and acknowledge that voter fraud and many of the other types of actions driven forth by our court are driven by an explicit attempt at political gain.”

Fraga pointed to a study conducted by Justin Levitt, a professor at Loyola Law School, Los Angeles. Levitt, an expert in constitutional law and the law of democracy, recently conduced a comprehensive investigation that found only 31 credible incidents of voter impersonation out of 1 billion cast ballots.

Jennifer Mason McAward, CCHR acting director and associate professor of law, explained the 2013 ruling of Shelby County v. Holder, the landmark U.S. Supreme Court case that brought into question the constitutionality of a key provision of the Voting Rights Act of 1965.

The Supreme Court ultimately ruled in a 5-4 decision that the formula for which states must seek pre-clearance for changes in their voting rules was unconstitutional. Almost immediately after the decision, a number of states changed their local voting laws.

Dianne Pinderhughes, chair of the Department of Africana Studies said that even though the Voting Rights Act of 1965 is one of the most important public policies developed over the last half century to increase access to the U.S. political system for people of color, the nation’s contentious racial history is a clear indicator as to why it’s been challenged.

“Slavery and stigma, one being viewed as property and being treated as distinct from other population groups, such as whites, discourages society from seeing blacks as equal,” she said.

Panelists encouraged the audience to exercise their right to vote.

“This is a pretty vigorous presidential primary season and I think it’s particularly important to engage everyone in our community around issues regarding how to exercise your right to vote,” McAward said.