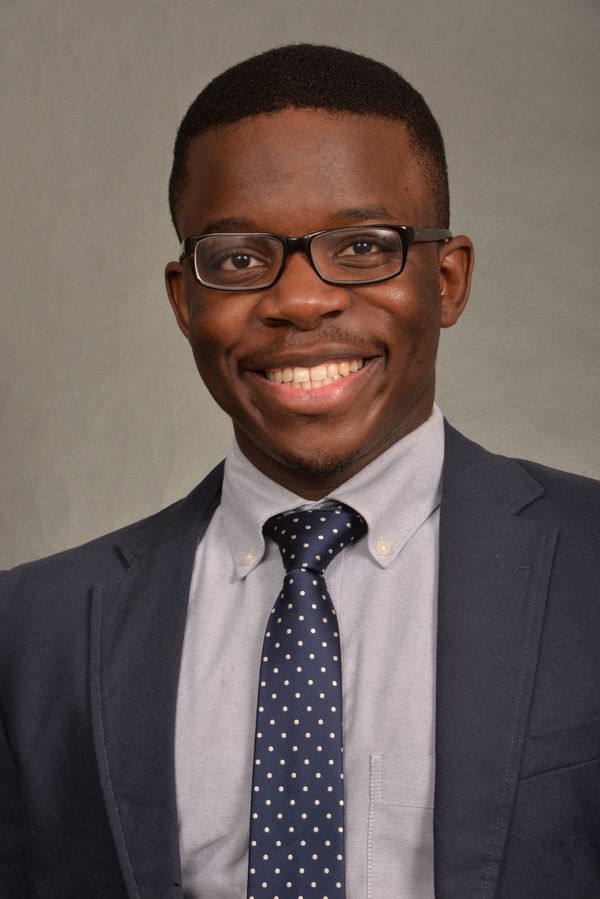 By Dean Nell Jessup Newton, Joseph A. Matson Dean and Professor of Law

Notre Dame law students, faculty, and staff joined the family of Karabo Moleah last week to mark the life of the third-year law student who died suddenly on April 1 in Fairmount, Pennsylvania.

The University marked Karabo’s passing with a mass at the Basilica of the Sacred Heart celebrated by University President Rev. John I. Jenkins, C.S.C. The Rev. Bill Dailey, C.S.C., law school professor and chaplain, delivered the homily. After the mass friends and family gathered in the Eck Commons to share their memories of a person aptly described by one classmate as an “intense but jubilant” friend.

“He was someone who asked questions and listened more than he spoke,” said Rachel Lynn, friend and classmate. “I hope that we can come together as a class and as a community and try to be a little more like Karabo. We need to ask questions, ask someone’s story, and learn how they’re really doing.” Like several of her classmates, Rachel spoke about how a conversation with Karabo often made one feel a little lighter and less burdened with the everyday complexities of law school life.

The influence Karabo had on those around him long preceded his days at Notre Dame. His sister explained that this was his birth rite. “In African culture, names are a promise and a destiny parents give to their children,” Boelang Moleah said. “In English, my brother’s name means, ‘the one who leads the way.’”

Reflections given by students and professors at the post-mass reception indicated Karabo fit this description perfectly, leading with wit and passion.

“He spoke in a manner that resembled poetic verse,” his classmate Mack Watson said. “He often weaved legal concepts together with black colloquialisms and frequent analogies to structure, not an argument, but a truism, on issues such as history, race, sex, violence, men, women, politics, and religion. Karabo’s demeanor was impressive and his intelligence conspicuous.”

The son of political refugees who were forced into exile, Karabo was born in Delaware but moved at the age of five to his family’s native country of South Africa shortly after the end of apartheid. Nelson Mandela personally asked Karabo’s father, Alfred, a professor of political science at Temple University, and his mother, Thabisile, a professor of nutrition at the University of Pennsylvania, to come back to help lead the new South Africa. When he was 10 years old the family moved again to Vienna, Austria, where his father served as South Africa’s ambassador.

Karabo’s father passed away when he was 15, but not before instilling in him values of critical thinking and the importance of never taking his privilege or faith for granted. Karabo carried these lessons with him through the rest of his life.

After attending high school in South Africa, Karabo returned to the United States to attend Temple University. A talented debater, he graduated from the university with a degree in criminal justice. I remember him describing himself as a “citizen of the world,” which is certainly true given his background. But he also called Philadelphia his true home and he often returned there to spend time with his godmother and aunt, Elizabeth Beacess.

NDLS students were eloquent in describing Karabo’s uniqueness. “I will always remember Karabo as a multicultural, transnational, fashionable, prolific maverick who was utterly his own man and one who was always memorable,” classmate Colin McArthur said.

His peers were not the only ones who felt the significant impact Karabo made on campus. Law School faculty members said they too could not help but notice and enjoy the young man with a remarkable background and unique outlook on life.

“He was sensitive, kind, considerate, quiet, sincere, thoughtful, caring, respectful, humble, and unselfish,” Professor Jimmy Gurulé said. Gurulé said the two built a rapport because of their mutual interests in international soccer and criminal law. “When he smiled I couldn’t help but return a smile. Karabo made me feel good. I have no doubt he would have made the criminal justice system more compassionate.”

Professor Bruce Huber came to know Karabo in the classroom and supervised his upper-level writing requirement. He summed up his impressions by saying, “I gained the privilege of speaking with a thoughtful, motivated, curious man with a remarkable background and unique outlook on life.”

Huber reported that “the very first time I called on him in my class he made reference to his time interning in the EPA and his review of air quality permits under Title V of the Clean Air Act. ‘Note to self,’ I thought, ‘Karabo knows more than I do.’”

Huber and Karabo shared an interest in energy law, one of Huber’s specialties. Karabo’s interest in the issue was sparked by his mother’s work. His mother is an official at the United Nations’ International Atomic Energy Agency in Vienna.

I spoke often to Karabo, who came by my office to learn more about me and the Law School rather than to ask questions about the material, or at least it seemed so to me. He was always himself, his integrity as a human being shining through his every interaction. He challenged me in the best sense of the word. Whether we were discussing diversity at the law school, the curriculum, or career options, I began to see him more as a colleague than a student. I came to love him and cherish his contributions to our community.

Huber’s comments at the reception sum up what many of us felt about this remarkable young man.

“The preeminent joy of teaching is being surrounded, class after class, year after year, with bright, warm, enthusiastic, colorful, thoughtful, reflective students —students who, in their beautiful and astounding variety, comprise a very clear picture of the creative hand of God, and who, in interactions large and small, testify to the goodness of God in a kind word, a smile, in companionship and courtesy, and in friendship and respect.

“Karabo was a beautiful part of that picture, a vivid testament to God’s goodness, and I will cherish his memory. “

Our hearts go out to his mother, Thabisile, his sister, Boelang, and his aunts and extended family. We have cried together and prayed together during this past week. The funeral in Philadelphia on Thursday was filled with friends from Austria, South Africa, Temple, and Notre Dame. Rest in peace, dear Karabo.