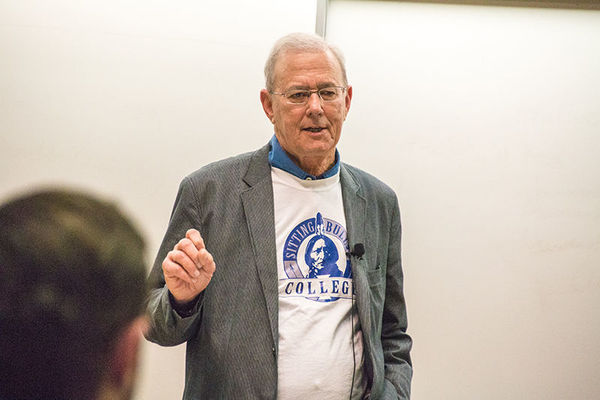 Norm Matteoni, ’63 J.D., presents “The Black Hills Are Not for Sale” on Sept. 7 in Biolchini Hall of Law. // Photo by Alicia Sachau, Notre Dame Law School.

For hundreds of years, the Black Hills – an isolated mountain range that rises amid the prairies of South Dakota – have been the spiritual home of the Lakota Sioux. And since the 1860s, the tribe’s members have been fighting the U.S. government over control of the land.

Norm Matteoni, ’63 J.D., delivered a presentation titled “The Black Hills Are Not for Sale” on Thursday at Notre Dame Law School. Matteoni, a property law specialist who practices in San Jose, Calif., described the series of clashes on battlefields, in legislatures, and in courtrooms between Lakota leaders and federal officials.

He said the Lakota’s story is one of resilience and persistence.

In 1979, the U.S. Court of Claims decided the 1877 law that the federal government used to seize the Black Hills violated the Fifth Amendment. The court awarded the tribe $17.5 million plus interest, which brought the total to more than $100 million. The U.S. Supreme Court affirmed the decision in 1980.

But the tribe – despite being afflicted with poverty on their reservations – declined the payment, explaining that the Black Hills are not for sale. The court’s award, still gathering interest in accounts at the U.S. Department of Treasury, tops $1 billion today.

“Even though it was a victory, it was not the right victory,” Matteoni said.

Matteoni, a member of the Notre Dame Law School Advisory Council since 2004, is widely respected as a leading expert on eminent domain and condemnation. He is the author of “Condemnation Practice in California” – a go-to resource for California attorneys.

In 2015, Matteoni wrote “Prairie Man,” a book about the conflict between Sitting Bull, the great Lakota chief, and Indian Agent James McLaughlin. Sitting Bull declared in 1868, “I wish all to know that I do not propose to sell any portion of my country.”