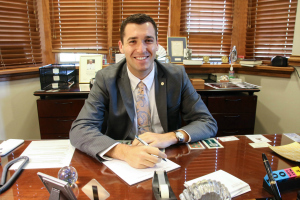 I am pleased to announce that Anthony M. Kroese, 3L, was sworn in as Dean of the University of Notre Dame Law School on April 24, 2017, and that he has agreed to serve in that important and august position until April 25, 2017.

During Dean Kroese’s short – but surely memorable – deanship, I will return to the faculty to concentrate on my research.

Dean Kroese was chosen by an incredibly rigorous process – he was the highest bidder at the Fr. Mike Show. He brings other strengths to the position as well. While obtaining his B.A. in political science from Canisius College, for example, Dean Kroese was a member of the Alpha Sigma Nu Honor Society and served as executive vice president of the Undergraduate Student Association and student master of DiGamma Honor Society. He also founded the Council of Presidents – an organization that focused on bringing all student clubs together to tackle campus issues.

Fortunately, his tradition of school service has continued at NDLS, where he has served as an admissions fellow, SBA social chair, American Bar Association representative, member of the ABA Law Student Division Nominating Committee, and member of the Journal of College and University Law.

Dean Kroese will need to draw upon all that experience and more as he works his way through his deanship. His April 24 itinerary includes meeting with the incoming SBA Executive Board, handling general student concerns, power lunching with future alumni, leading a student discussion about the future of the Law School Softball Team, and gracefully meeting with anyone else who happens to drop by his office in 2100 Eck before he returns to 3L status on April 25.

Although his deanship will be short, there is no doubt that he will land on his feet. After his graduation this May, Dean Kroese will be joining the Buffalo, N.Y., office of Goldberg Segalla to practice with the firm’s Business and Commercial Practice Group. In addition, he says, “I plan to continue my involvement with the regional community and to help further the mission of Canisius College by engaging with fellow alumni. I am also excited to continue my involvement with Notre Dame Law School and to serve as a mentor for future NDLS students.”

Please join me in welcoming our Dean for the Day Anthony M. Kroese.